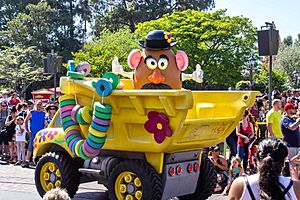 Mr. Potato Head at a parade

Mr. Potato Head is an American toy. It is a plastic model of a potato, that can be decorated with several plastic parts that attach to the toy's body. Some examples include ears, eyes, shoes, hats, noses, and a mouth. The toy was invented and designed by George Lerner in 1949 and manufactured and distributed by Hasbro in 1952.

All content from Kiddle encyclopedia articles (including the article images and facts) can be freely used under Attribution-ShareAlike license, unless stated otherwise. Cite this article:
Mr. Potato Head Facts for Kids. Kiddle Encyclopedia.