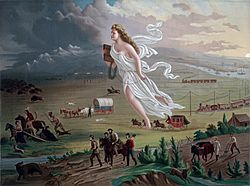 John Gast, American Progress, c. 1872. The right side of the painting shows white settlers and modern technology arriving and the area is depicted in brightness. The left side of the painting shows indigenous people and wildlife leaving and the area is depicted in darkness. In the middle is an angelic female representation of "manifest destiny" – the concept and agenda that promoted westward territorial expansion of the United States as a necessity.

Progressivism is the support for or advocacy of social reform. As a philosophy, it is based on the idea of progress, which asserts that advancements in science, technology, economic development and social organization are vital to the improvement of the human condition.

Some of the leaders of the progressive movement were Theodore Roosevelt, Hiram Johnson , William Howard Taft and Robert M. LaFollette.

All content from Kiddle encyclopedia articles (including the article images and facts) can be freely used under Attribution-ShareAlike license, unless stated otherwise. Cite this article:
Progressivism Facts for Kids. Kiddle Encyclopedia.