John Stuart Mill (20 May 1806 – 8 May 1873), usually cited as J. S. Mill, was a British philosopher, political economist, and civil servant. One of the most influential thinkers in the history of liberalism, he contributed widely to social theory, political theory, and political economy. Dubbed "the most influential English-speaking philosopher of the nineteenth century", Mill's conception of liberty justified the freedom of the individual in opposition to unlimited state and social control.

Mill was a proponent of utilitarianism, an ethical theory developed by his predecessor Jeremy Bentham. He contributed to the investigation of scientific methodology, though his knowledge of the topic was based on the writings of others, notably William Whewell, John Herschel, and Auguste Comte, and research carried out for Mill by Alexander Bain. Mill engaged in written debate with Whewell.

A member of the Liberal Party, he was also the first Member of Parliament to call for women's suffrage. 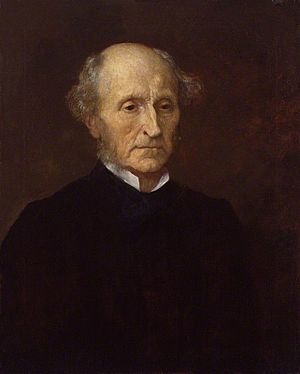 John Stuart Mill was born at 13 Rodney Street in Pentonville, Middlesex, the eldest son of the Scottish philosopher, historian and economist James Mill, and Harriet Burrow. John Stuart was educated by his father, with the advice and assistance of Jeremy Bentham and Francis Place. He was given an extremely rigorous upbringing, and was deliberately shielded from association with children his own age other than his siblings. His father, a follower of Bentham and an adherent of associationism, had as his explicit aim to create a genius intellect that would carry on the cause of utilitarianism and its implementation after he and Bentham had died.

At the age of three he was taught Greek. By the age of eight, he had read Aesop's Fables, Xenophon's Anabasis, and the whole of Herodotus, and was acquainted with Lucian, Diogenes Laërtius, Isocrates and six dialogues of Plato. He had also read a great deal of history in English and had been taught arithmetic, physics and astronomy.

At the age of eight, Mill began studying Latin, the works of Euclid, and algebra, and was appointed schoolmaster to the younger children of the family. His main reading was still history, but he went through all the commonly taught Latin and Greek authors and by the age of ten could read Plato and Demosthenes with ease. His father also thought that it was important for Mill to study and compose poetry. In his spare time he also enjoyed reading about natural sciences and popular novels, such as Don Quixote and Robinson Crusoe.

As a nonconformist who refused to subscribe to the Thirty-Nine Articles of the Church of England, Mill was not eligible to study at the University of Oxford or the University of Cambridge. Instead he followed his father to work for the East India Company, and attended University College, London, to hear the lectures of John Austin, the first Professor of Jurisprudence. He was elected a Foreign Honorary Member of the American Academy of Arts and Sciences in 1856.

In 1851, Mill married Harriet Taylor after 21 years of friendship. His relationship with Harriet Taylor reinforced Mill's advocacy of women's rights. He cites her influence in his final revision of On Liberty, which was published shortly after her death. Taylor died in 1858 after developing severe lung congestion, after only seven years of marriage to Mill.

Between the years 1865 and 1868 Mill served as Lord Rector of the University of St. Andrews. During the same period, 1865–68, he was a Member of Parliament for City and Westminster. He was sitting for the Liberal Party. During his time as an MP, Mill advocated easing the burdens on Ireland. 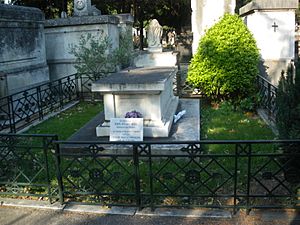 In 1866, Mill became the first person in the history of Parliament to call for women to be given the right to vote, vigorously defending this position in subsequent debate. Mill became a strong advocate of such social reforms as labour unions and farm cooperatives. In April 1868, Mill favoured in a Commons debate the retention of capital punishment for such crimes as aggravated murder.

He was godfather to the philosopher Bertrand Russell.

In his views on religion, Mill was an agnostic.

Mill died in 1873 of erysipelas in Avignon, France, where his body was buried alongside his wife's

All content from Kiddle encyclopedia articles (including the article images and facts) can be freely used under Attribution-ShareAlike license, unless stated otherwise. Cite this article:
John Stuart Mill Facts for Kids. Kiddle Encyclopedia.