Sir Charles Babbage (26 December 1791 – 18 October 1871) was an English mathematician, analytical philosopher, mechanical engineer and computer scientist. He was the first person to invent the idea of a computer that could be programmed. Unfinished parts of his mechanisms are on display in the London Science Museum.

Charles Babbage was born in England, at 44 Crosby Row, Walworth Road, London. Babbage's father, Benjamin Babbage, was a banker in London who owned the Bitton Estate in Teignmouth. His mother was Betsy Plumleigh Babbage. In 1808, the Babbage family moved into the old Rowdens house in East Teignmouth.

His Brain is also on display at the Science Museum in London.

Knowing that there were many errors in the calculation of mathematical tables, Babbage wanted to find a way to calculate them mechanically, removing errors made by humans. Three different factors seem to have influenced him: a dislike of untidiness; his experience working on logarithmic tables and differential calculus; and work on calculating machines already done by Wilhelm Schickard, Blaise Pascal, and Gottfried Leibniz. He first talked about the principles of a calculating engine in a letter to Sir Humphrey Davy in 1822.

Babbage's engines were among the first mechanical computers. His engines were not actually completed because he did not have enough money. Babbage realized that a machine could do the work better and more reliably than a human being. Babbage controlled building of some steam-powered machines that more or less did their job; calculations could be mechanized to an extent. Although Babbage's machines were large machines they were organized in a way similar to modern computer architecture. The data and program memory were separated, operation was instruction based, control unit could make conditional jumps and the machine had a separate I/O unit. Ada Lovelace studied how to program them. 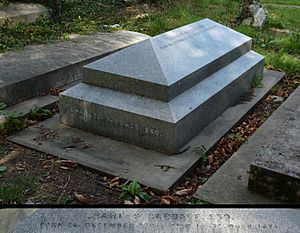 His youngest surviving son, Henry Prevost Babbage (1824–1918), went on to create six small demonstration pieces for Difference Engine No. 1 based on his father's designs, one of which was sent to Harvard University where it was later discovered by Howard H. Aiken, pioneer of the Harvard Mark I. Henry Prevost's 1910 Analytical Engine Mill, previously on display at Dudmaston Hall, is now on display at the Science Museum. 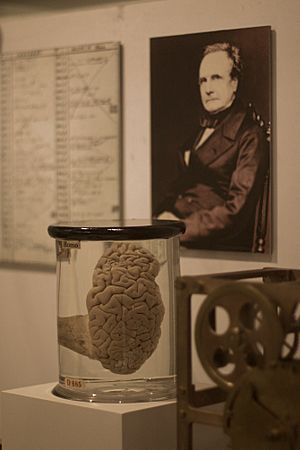 Charles Babbage's brain is on display at The Science Museum

Babbage lived and worked for over 40 years at 1 Dorset Street, Marylebone, where he died, at the age of 79, on 18 October 1871; he was buried in London's Kensal Green Cemetery. He had declined both a knighthood and baronetcy. He also argued against hereditary peerages, favouring life peerages instead. 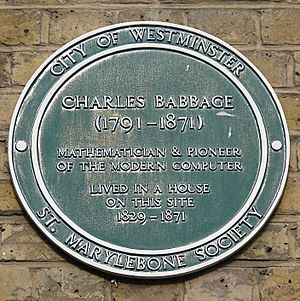 There is a black plaque commemorating the 40 years Babbage spent at 1 Dorset Street, London. Locations, institutions and other things named after Babbage include:

All content from Kiddle encyclopedia articles (including the article images and facts) can be freely used under Attribution-ShareAlike license, unless stated otherwise. Cite this article:
Charles Babbage Facts for Kids. Kiddle Encyclopedia.