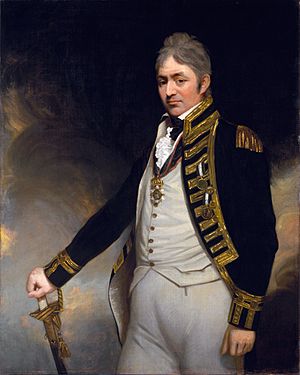 Sir Thomas Troubridge, 1st Baronet. His entitlement to the style of 'Sir' derived from his position as a baronet.

Sir is a title commonly given to men who have been knighted, but also as a way to address any male, especially if his name is not known. The equivalents for a woman are "Lady" and "madam".

All content from Kiddle encyclopedia articles (including the article images and facts) can be freely used under Attribution-ShareAlike license, unless stated otherwise. Cite this article:
Sir Facts for Kids. Kiddle Encyclopedia.