Order of the Star of India facts for kids

The article is about the order of chivalry known as "Star of India". For other items of the same name, please see disambiguation at Star of India.

The Most Exalted Order of the Star of India is an order of chivalry founded by Queen Victoria in 1861. The Order includes members of three classes:

No appointments have been made since the Partition of India in 1947. The last living knight, The Maharaja of Alwar, died in 2009 and the order became.

The motto of the Order is Heaven's light our guide. The "Star of India", the emblem of the Order, also appeared on the flag of the Viceroy of India.

After the Indian Mutiny the British government created a new order of knighthood to honour Indian Princes and Chiefs, as well as British officers and administrators who served in India. On 25 June 1861, Queen Victoria issued a proclamation creating "The Most Exalted Order of the Star of India" to "reward conspicuous merit and loyalty"

The flag of the Viceroy of India displayed the Star of the Order beneath the Imperial Crown of India.

The first appointees were:

See also: List of Knights Companion of the Order of the Star of India

The Order of the Indian Empire, founded in 1877, was intended to be a less exclusive version of the Order of the Star of India; consequently, many more appointments were made to the former than to the latter. 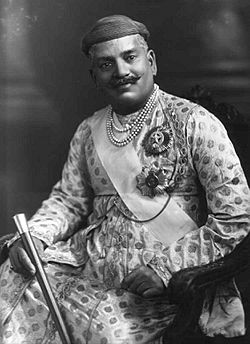 Sayajirao Gaekwad III, Maharaja of Baroda, wearing the sash and star of a GCSI, as well as the star of a GCIE. 1919 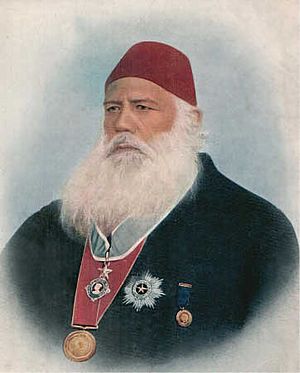 The British Sovereign was, and still is, Sovereign of the Order. The next-most senior member was the Grand Master; the position was held, ex officio, by the Viceroy of India. When the Order was established in 1861, there was only one class of Knights Companions, who bore the postnominals KSI. In 1866, however, it was expanded to three classes. Members of the first class were known as "Knights Grand Commanders", rather than "Knights Grand Cross", so as not to offend the non-Christian Indians appointed to the Order. All those surviving members who had already been made Knights Companions of the Order were made Knights Grand Commanders.

Rulers of other nations in Asia and the Middle East, including the Emir of Kuwait, the Maharajas of the Rana dynasty, the Khedive of Egypt, the King of Bhutan and the rulers of Zanzibar, Bahrain and Oman were also appointed to the Order. Like some rulers of princely states, some rulers of particular prestige, for example the Maharajas of the Rana dynasty or the Sultans of Oman, were usually appointed Knights Grand Commanders.

Women, who were not princely rulers, could not be members of the Order. They were, admitted as "Knights", rather than as "Dames" or "Ladies". The first woman to be admitted to the Order was HH Nawab Sikandar Begum Sahiba, Nawab Begum of Bhopal; she was created a Knight Companion at the Order's foundation in 1861. The Order's statutes were specially amended to permit the admission of Queen Mary as a Knight Grand Commander in 1911.

All content from Kiddle encyclopedia articles (including the article images and facts) can be freely used under Attribution-ShareAlike license, unless stated otherwise. Cite this article:
Order of the Star of India Facts for Kids. Kiddle Encyclopedia.