Nizam of Hyderabad facts for kids

Nizam was the title of the native sovereigns of Hyderabad State, India, since 1719. They belonged to the Asaf Jah dynasty. The dynasty was founded by Mir Qamar-ud-Din Siddiqi, a viceroy of the Deccan under the Mughal emperors from 1713 to 1721. After Aurangzeb's death in 1707, the Mughal Empire fell apart and the viceroy in Hyderabad said he was independent. From 1798 Hyderabad was one of the princely states of British India, but it kept local control.

Seven Nizams ruled Hyderabad for two centuries until Indian independence in 1947. The Asaf Jahi rulers used money to support much literature, art, architecture, culture, jewelry and rich food. The Nizams ruled the state until September 1948 after independence from the British. 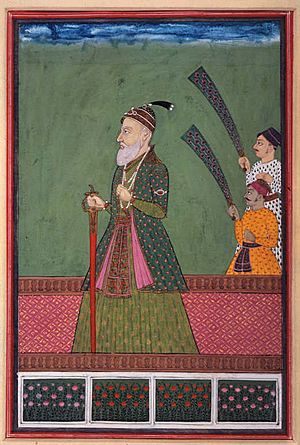 The Asaf Jahi dynasty began near Samarkand. The family came to India from Baghdad in the late 17th century. They were direct descendants of the first Khalifa of Islam, Hazrat Sayyadina Abu bakr Siddiq Razi Allahutaala Anha.

Origin of the Nizam title

Nizām-ul-mulk was a title first used in Urdu around 1600. It comes from the Arabic word, nizām (نظام), meaning order, arrangement. The Nizam was also called Ala Hadrat, Ala Hazrat, or Nizam Sarkar.

Rise of the Nizams

The first Nizam ruled in place of the Mughal emperors. After Aurangzeb died, the Nizams left the Mughals to make an independent kingdom. When the British got power over India, the Nizams were allowed to continue to rule for the British. The Nizams kept power in Hyderabad State until 17 September 1948. Hyderabad then became part of the new Indian Union.

The Asaf Jah dynasty had only seven rulers. However, for 13 years after the rule of the first Nizam, three of his sons (Nasir Jung, Muzafar Jung and Salabath Jung) ruled. They were not officially recognized as the rulers.

A legend about the first Nizam says that, on one of his hunting trips he was offered some kulchas (an Indian bread) by a holy man. He asked the Nizam to eat as many as he could. The Nizam ate seven kulchas and the holy man predicted that seven generations of his family would rule the state.

By tradition no Nizam has ever left India, even if there was good a reason.

Hyderabad did not join the first war of Indian Independence of 1857 against the British. Therefore its Royal Family had special, official status of Faithful Ally with Britain. 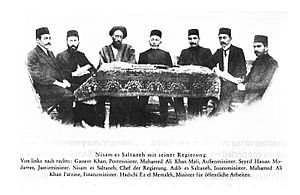 A cover story by TIME on February 22, 1937 called the last Nizam as the wealthiest man in the world

Palaces of the Nizams

The Asaf Jahis were built many palaces.

Other landmarks like the Andhra Pradesh High Court, Jubilee Hall, Asafia library, The Assembly building, the Osmania Arts College and the Osmania Medical College are some of their important buildings.

The Nizams liked the European style of architecture and created a fusion of European traditions with Hindu and Islamic forms and images.

After the British left India in 1947, the princely state of Hyderabad did not join either of the new dominions of India or Pakistan. The Nizam's rule ended on 17 September 1948. His soldiers surrendered to Indian soldiers.

All Nizams are buried in the royal graves at the Makkah Masjid near Charminar in Hyderabad. Only the last Nizam, Mir Osman Ali Khan is buried in a different place. His mausoleum is in the Judi Mosque facing King Kothi Palace.

All content from Kiddle encyclopedia articles (including the article images and facts) can be freely used under Attribution-ShareAlike license, unless stated otherwise. Cite this article:
Nizam of Hyderabad Facts for Kids. Kiddle Encyclopedia.