Samarkand is a famous city. It is the second-largest city in Uzbekistan and the capital of Samarqand Province.

The city is on the old Silk Road between China and the West, and is an Islamic centre for scholarly study. In the 14th century, it became the capital of the empire of Timur (Tamerlane), and is the site of his mausoleum, the Gur-e Amir. The Bibi-Khanym Mosque remains one of the city's most famous landmarks. The Registan was the ancient centre of the city.

In 2001, UNESCO added the 2,750-year-old city to its World Heritage Site list as Samarkand – Crossroads of Cultures.

Samarkand is one of the oldest inhabited cities in the world, prospering from its location on the trade route between China and the Mediterranean (Silk Road). At times Samarkand has been one of the greatest cities of Central Asia.

Founded circa 700 BC by the Persians, Samarkand has been one of the main centres of Persian civilization from its early days. Alexander the Great conquered it in 329BC. 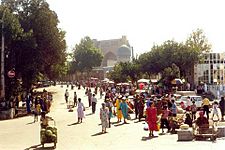 At the start of the 8th century Samarkand came under Arab control. Under Abbasid rule, the legend goes, the secret of papermaking was obtained from two Chinese prisoners in 751. This led to the first paper mill in the Islamic world being founded in Samarkand. The invention then spread to the rest of the Islamic world, and from there to Europe.

Samarkand was sacked by the Mongols under Genghis Khan in 1220 . Some of the people survived, but later Samarkand suffered at least one other Mongol sack. The town took many decades to recover from these disasters. In The Travels of Marco Polo, where Polo records his journey along the Silk Road, Samarkand is described as "a very large and splendid city..." He also writes about a Christian church in Samarkand, which miraculously remained standing after a portion of its central supporting column was removed.

In 1370, Timur the Lame, or Tamerlane, decided to make Samarkand the capital of his empire, which extended from India to Turkey. During the next 35 years he built a new city and populated it with artisans and craftsmen from all of the places he had conquered. Timur gained a reputation as a patron of the arts, and Samarkand grew to have a population of about 150,000.

In 1499, the Uzbek Turks took control of Samarkand. They moved the capital to Bukhara and Samarkand went into decline. The city came under Russian rule in 1868. The Russian section of the city was built after this point, largely to the west of the old city.

All content from Kiddle encyclopedia articles (including the article images and facts) can be freely used under Attribution-ShareAlike license, unless stated otherwise. Cite this article:
Samarkand Facts for Kids. Kiddle Encyclopedia.