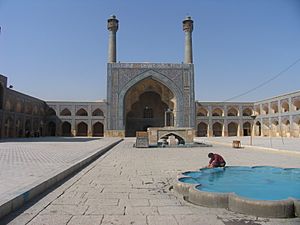 Great Mosque of Esfahan, View of the north iwan from the courtyard

An Iwan, also spelled ivan, is a rectangular hall or space, usually vaulted, walled on three sides, with one end entirely open. The formal gateway to the iwan is called pishtaq, a Persian term for a portal projecting from the face of a building, usually decorated with calligraphy bands, glazed tilework, and geometric designs.

Since the definition allows for some interpretation, the overall forms and characteristics can vary greatly in terms of scale, material, or decoration. Iwans are most commonly associated with Islamic architecture; however, the form is Iranian in origin and was invented much earlier and fully developed in Mesopotamia around the third century CE, during the Parthian period of Persia.

Typically, iwans open on to a central courtyard, and have been used in both public and residential architecture.

All content from Kiddle encyclopedia articles (including the article images and facts) can be freely used under Attribution-ShareAlike license, unless stated otherwise. Cite this article:
Iwan Facts for Kids. Kiddle Encyclopedia.