Kashan is a city in Isfahan province, Iran. At the 2017 census, its population was 396,987 in 90,828 families. The origin of the city name comes from the Kasian, the original inhabitants of the city, whose remains are found at Tapeh Sialk dating back 9,000 years; later this was changed to "Kashian", hence the town name. Between the 12th and the 14th centuries Kashan was an important centre for the production of high quality pottery and tiles.

Kashan is divided into two parts, mountainous and desert. In the west side, Kashan is cited in the neighbourhood of two of highest peaks of Karkas chain, Mount Gargash to the southwest of Kashan (the home of Iran national observatory, the largest astronomical telescope of Iran) and Mount Ardehaal in the west of Kashan, also known as "Damavand of Kashan" and the highest peak of Ardehaal mountains. 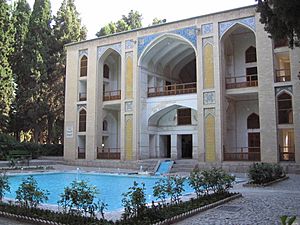 In the east side of the city Kashan opens up to the central desert of Iran which the city is famous for. Kashan is also known for Maranjab Desert and Caravanserai located near the namak lake (or salt lake). Today Maranjab and the surrounding Shifting Sands is a popular destination at the weekends.

On August 9, 2007 Iran placed the Historical Axis of Fin, Sialk, Kashan on its Tentative List for possible future nomination as a UNESCO World Heritage Site. In 2012 Iran successfully nominated the Fin Garden separately for inscription by UNESCO as a part of its Persian Gardens World Heritage Site. 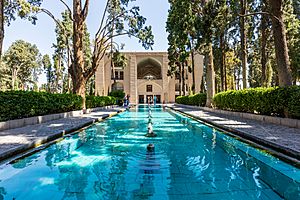 Archeological discoveries in the Sialk Hillocks which lie 4 km west of Kashan reveal that this region was one of the primary centers of civilization in pre-historic ages. Hence, Kashan dates back to the Elamite period of Iran. The Sialk ziggurat still stands today in the suburbs of Kashan after 7,000 years.

The artifacts uncovered at Sialk Mahan Pasha reside in the Louvre in Paris and the New York Metropolitan Museum of Art, and Iran's National Museum. 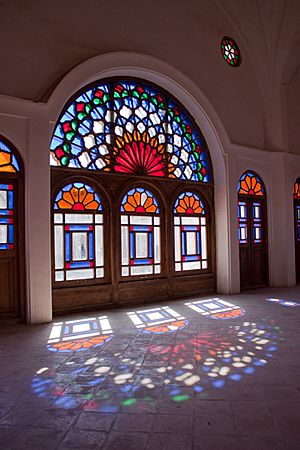 By some accounts, although not all, Kashan was the origin of the three wise men who followed the star that guided them to Bethlehem to witness the nativity of Jesus, as recounted in the Bible. Whatever the historical validity of this story, the attribution of Kashan as their original home testifies to the city's prestige at the time the story was set down.

Although there are many sites in Kashan of potential interest to tourists, the city remains largely undeveloped in this sector, with fewer than a thousand foreign tourists per year. Notable towns around Kashan are Qamsar and Abyaneh, which attract tourists all year around. The nearby town of Niasar features a man-made cave and fireplace of historical interest.

Kashan is internationally famous for manufacturing carpets, silk and other textiles. Today, Kashan houses most of Iran's mechanized carpet-weaving factories, and has an active marble and copper mining industry.

All content from Kiddle encyclopedia articles (including the article images and facts) can be freely used under Attribution-ShareAlike license, unless stated otherwise. Cite this article:
Kashan Facts for Kids. Kiddle Encyclopedia.