Mīrzā Muhammad Tāraghay bin Shāhrukh (March 22, 1394 in Sultaniyeh, Persia – October 27, 1449, Samarkand, Uzbekistan), was a Timurid Sultan as well as an astronomer and mathematician.

Ulugh Beg was notable for his work in astronomy-related mathematics, such as trigonometry and spherical geometry, as well as his general interests in the arts and intellectual activities. It is thought that he spoke five languages: Arabic, Persian, Turkic, Mongolian, and a small amount of Chinese. During his rule (first as a governor, then outright) the Timurid Empire achieved its cultural peak through Ulugh Beg's attention and patronage. Samarkand, which was captured and given to Ulugh Beg by his father Shah Rukh, became the headquarters of Muslim culture.

He built the great Ulugh Beg Observatory in Samarkand between 1424 and 1429. It was considered by scholars to have been one of the finest observatories in the Islamic world at the time and the largest in Central Asia. Ulugh Beg was subsequently recognized as the most important observational astronomer from the 15th century by many scholars. He also built the Ulugh Beg Madrasah (1417–1420) in Samarkand and Bukhara, transforming the cities into cultural centers of learning in Central Asia.

However, Ulugh Beg's scientific expertise was not matched by his skills in governance. During his short reign, he failed to establish his power and authority. As a result, other rulers, including his family, took advantage of his lack of control and he was subsequently overthrown and assassinated. 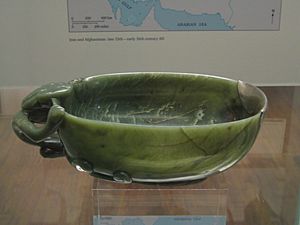 He was a grandson of the great conqueror, Timur (Tamerlane) (1336–1405), and the oldest son of Shah Rukh, both of whom came from the Turkicized Barlas tribe of Transoxiana (now Uzbekistan). His mother was a noblewoman named Goharshad, daughter of a member of the representative Turkic tribal aristocracy, Ghiyasuddin Tarkhan. Ulugh Beg was born in Sultaniyeh in Persia during Timur's invasion.

His was given the name Mīrzā Muhammad Tāraghay. Ulugh Beg, the name he most commonly known by, was not truly a personal name, but rather a moniker, which can be loosely translated as "Great Ruler" (compare modern Turkish ulu, "great", and bey, "chief") and is the Turkic equivalent of Timur's Perso-Arabic title Amīr-e Kabīr.

As a child he wandered through a substantial part of the Middle East and India as his grandfather expanded his conquests in those areas. After Timur's death, Shah Rukh moved the empire's capital to Herat (in modern Afghanistan). Sixteen-year-old Ulugh Beg subsequently became the governor of the former capital of Samarkand in 1409. In 1411, he was named the sovereign ruler of the whole of Mavarannahr.

He was also famous in the fields of medicine and poetry. He used to debate with other poets about contemporary social issues. He liked to debate in a poetic style, called "Bahribayt" among local poets. According to the Russian medical book "Mashkovskiy", Ulugh Beg discovered a mixture of alcohol with garlic, apparently preserving it to help treat conditions like diarrhea, headache, stomach ache and intestine illnesses. He also offered advice for newly married couples, which indicate recipes containing nuts, dried apricot, dried grape etc. He claimed these to be useful to increase men's virility. This recipe has been given in Ibn Sina's books also.

From an early age, astronomy piqued his interest after he paid a visit to what was still present of the Maragheh Observatory located in Maragheh, Iran. This is the observatory where the well-known astronomer Nasir al-Din al-Tusi practiced.

Lacking telescopes to work with, he increased his accuracy by increasing the length of his sextant; the so-called Fakhri sextant had a radius of about 36 meters (118 feet) and the optical separability of 180" (seconds of arc). The Fakhri sextant was the largest instrument at the observatory in Samarkand (an image of the sextant is on the side of this article).

There were many other astronomical instruments located at the observatory, but the Fakhri sextant is the most well-known instrument there. The purpose of the Fakhri sextant was to measure the transit altitudes of the stars. This was a measurement of the maximum altitude above the horizon of the stars. It was only possible to use this device to measure the decline of natural objects in space.

With the instruments located in the observatory in Samarkand, Ulugh Beg composed a star catalogue consisting of 1018 stars, which is eleven less stars than are present in the star catalogue of Ptolemy.

Ulugh Beg also determined the Earth's axial tilt as 23°30'17" in the sexagesimal system of degrees, minutes and seconds of arc, which in decimal notation converts to 23.5047 degrees.

War of succession and death

In 1447, upon learning of the death of his father Shah Rukh, Ulugh Beg went to Balkh. Here, he heard that Ala-ud-Daulah Mirza, the son of his late brother Baysonqor, had claimed the rulership of the Timurid Empire in Herat. Consequently, Ulugh Beg marched against Ala-ud-Daulah and met him in battle at Murghab. He defeated his nephew and advanced toward Herat, massacring its people in 1448. However, Abul-Qasim Babur Mirza, Ala-ud-Daulah's brother, came to the latter's aid and defeated Ulugh Beg.

Ulugh Beg retreated to Balkh, where he found that its governor, his oldest son Abdal-Latif Mirza, had rebelled against him. Another civil war ensued. Abdal-Latif recruited troops to meet his father's army on the banks of the Amu Darya river. However, Ulugh Beg was forced to retreat to Samarkand before any fighting took place, having heard news of turmoil in the city. Abdal-Latif soon reached Samarkand and Ulugh Beg involuntarily surrendered to his son. Abd-al-Latif released his father from custody, allowing him to make pilgrimage to Mecca. However he ensured Ulugh Beg never reached his destination, having him, as well as his brother Abdal-Aziz assassinated in 1449.

Eventually, Ulugh Beg's reputation was rehabilitated by his nephew, Abdallah Mirza (1450–1451), who placed his remains in the mausoleum of Timur in Samarkand, where they were found by Soviet archeologists in 1941. 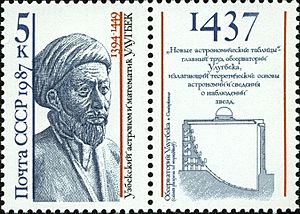 Ulugh Beg and his astronomical observatory scheme, depicted on the 1987 USSR stamp. He was one of Islam's greatest astronomers during the Middle Ages. The stamp says "Uzbek astronomer and mathematician Ulugbek" in Russian.

Soviet anthropologist Mikhail M. Gerasimov reconstructed the face of Ulugh Beg. Like his grandfather Timurlane, Ulugh Beg is close to the Mongoloid type with slightly Europoid features. His father Shah Rukh, had predominantly Caucasoid features, with no obvious Mongoloid feature. 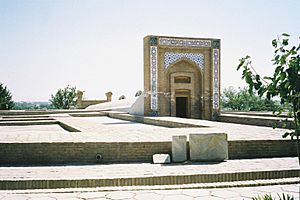 This is the observatory built by Ulugh Beg in the 1420s. The site was later rediscovered by Russian archaeologists in 1908.

All content from Kiddle encyclopedia articles (including the article images and facts) can be freely used under Attribution-ShareAlike license, unless stated otherwise. Cite this article:
Ulugh Beg Facts for Kids. Kiddle Encyclopedia.