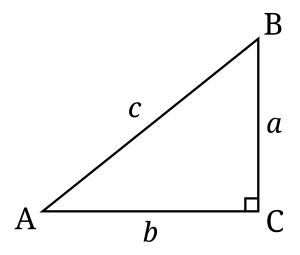 A standard right triangle. C is the right angle in this picture

Trigonometry uses a large number of specific words to describe parts of a triangle. Some of the definitions in trigonometry are:

There are three main trigonometric ratios for right triangles, and three reciprocals of those ratios, making up a total of 6 ratios. They are:

The reciprocals of these ratios are:

Cosecant (cosec) - The cosecant of an angle is equal to the

Secant (sec) - The secant of an angle is equal to the

Cotangent (cot) - The cotangent of an angle is equal to the

Students often use a mnemonic to remember this relationship. The sine, cosine, and tangent ratios in a right triangle can be remembered by representing them as strings of letters, such as SOH-CAH-TOA:

With the sines and cosines, one can answer virtually all questions about triangles. This is called "solving" the triangle. One can work out the remaining angles and sides of any triangle, as soon as two sides and their included angle or two angles and a side or three sides are known. These laws are useful in all branches of geometry, since every polygon may be described as a combination of triangles.

Trigonometry is also vital in surveying, in vector analysis, and in the study of periodic functions. It developed from a need to compute angles and distances in fields such as astronomy, mapmaking, surveying, and artillery range finding.

There is also such a thing as spherical trigonometry, which deals with spherical geometry. This is used for calculations in astronomy, geodesy and navigation.

All content from Kiddle encyclopedia articles (including the article images and facts) can be freely used under Attribution-ShareAlike license, unless stated otherwise. Cite this article:
Trigonometry Facts for Kids. Kiddle Encyclopedia.