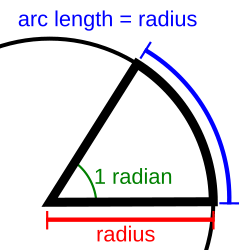 Definition of a radian

A radian is a unit of angular measure. A revolution of a circle has an angle of 2π radians.

A radian is a unit of measuring angles. It is shown by the symbol "rad" or, less often, c (for circular measure). The radian was once an SI supplementary unit, but was changed to a derived unit in 1995.

People who look through a telescope or sniper scope often use milliradians to describe distances as seen through it.

1 radian is equal to about 57.3°. There are 2π radians (about 6.28 radians) in a full circle. The formula for turning radians to degrees and vice versa is:

we can also say that:

All content from Kiddle encyclopedia articles (including the article images and facts) can be freely used under Attribution-ShareAlike license, unless stated otherwise. Cite this article:
Radian Facts for Kids. Kiddle Encyclopedia.