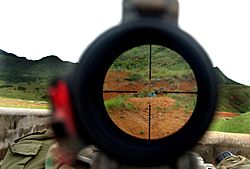 A sniper scope or telecopic sight is a kind of telescope that is attached to a rifle. These scopes can help a sniper aim and hit a target far away. Usually, they are made of metal, with glass on each end. They show markings to help aim.

All content from Kiddle encyclopedia articles (including the article images and facts) can be freely used under Attribution-ShareAlike license, unless stated otherwise. Cite this article:
Sniper scope Facts for Kids. Kiddle Encyclopedia.