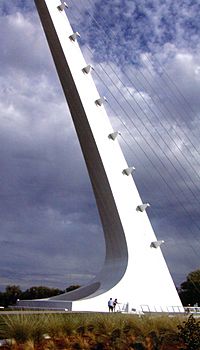 The cantilever spar of this cable-stay bridge, the Sundial Bridge at Turtle Bay, forms the gnomon of a large garden sundial

The gnomon is the part of a sundial which casts the shadow. Gnomon is an ancient Greek word meaning "indicator", "one who discerns," or "that which reveals." In the northern hemisphere, the shadow-casting edge is normally oriented so that it points north and is parallel to the rotation axis of the Earth. That is, it is inclined to the horizontal at an angle that equals the latitude of the sundial's location. On some sundials, the gnomon is vertical. These were usually used in former times for observing the altitude of the sun, especially when on the meridian. The style is the part of the gnomon that casts the shadow. This can change as the sun moves. For example, the upper west edge of the gnomon might be the style in the morning and the upper east edge might be the style in the afternoon.

The art of constructing a gnomon sundial is sometimes termed gnomonics.

Anaximander is credited to introduce this Babylonian instrument to the Greeks.

The gnomon is the triangular blade in this sundial.

All content from Kiddle encyclopedia articles (including the article images and facts) can be freely used under Attribution-ShareAlike license, unless stated otherwise. Cite this article:
Gnomon Facts for Kids. Kiddle Encyclopedia.