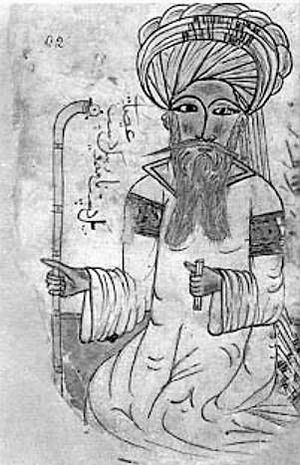 A drawing of Avicenna from 1271

Avicenna (c. 980 – 1037) was a Persian polymath and the most important doctor and Islamic philosopher of his time.

He wrote about 450 works on a wide range of subjects, and about 240 have survived, including 150 on philosophy and 40 on medicine.

His most famous works are The Book of Healing – a philosophical and scientific encyclopedia, and The Canon of Medicine – a medical encyclopedia.

Avicenna was born near Bukhara, which at the time was ruled by Samanid dynasty. His father was a government official and his home served as a meeting place for men of learning. Avicenna had educated teachers while growing up. By age 14 he had mastered many subjects and had already memorized the Quran. From the age of 14 to 18 he taught himself because he could not find a tutor to provide more information than he already knew. He began to practice and learn about medicine at 16. He also learned about law and natural sciences. He was good at all subjects but decided medicine was easier for him than mathematics or metaphysics. Sometime before he turned 18 years old, he cured a Samanid emir. Because of this he was allowed into the royal libraries of the Samanid dynasty. By the age of 18 he had become a master of the most important works of science in his time. Also, his reputation as a doctor had grown. At 20 he was regarded as one of the wisest people of his time.

All content from Kiddle encyclopedia articles (including the article images and facts) can be freely used under Attribution-ShareAlike license, unless stated otherwise. Cite this article:
Avicenna Facts for Kids. Kiddle Encyclopedia.