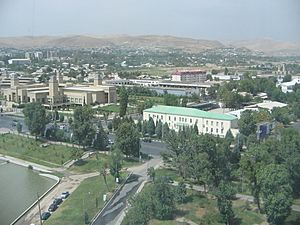 View from a hill 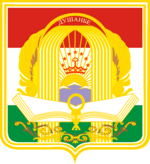 Dushanbe (Tajik: Душанбе, Persian: دوشنبه) is the capital city of Tajikistan. About 562,000 people live in Dushanbe as of 2000. The name is borrowed from the Persian word for "Monday" (du "two" + shamba or shanbe "day", lit. "day two") and refers to the fact that it was a popular "Monday" market place.

All content from Kiddle encyclopedia articles (including the article images and facts) can be freely used under Attribution-ShareAlike license, unless stated otherwise. Cite this article:
Dushanbe Facts for Kids. Kiddle Encyclopedia.