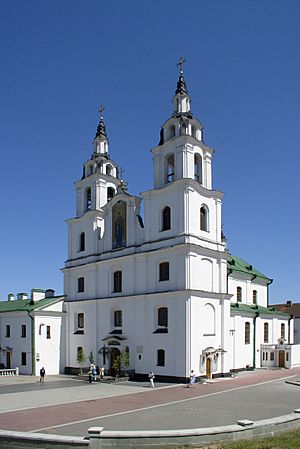 The Cathedral of the Holy Spirit, in Minsk 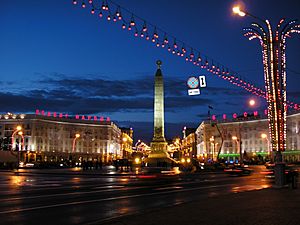 Minsk or Miensk (Мінск (official spelling in Belarus), Менск; Минск ; Mińsk) is the capital and a major city of Belarus. 1.8 million people live in the city. Minsk is also a headquarters of the Commonwealth of Independent States. As a capital, Minsk has a special administrative status in Belarus and is also the capital of Minsk voblast (province) and Minsk raion. Minsk is situated by the Svislach and Niamiha rivers. The timezone in Minsk is GMT +2.

The oldest mentions of Minsk date back to the 11th century (1067). In 1326 Minsk became a part of the Grand Duchy of Lithuania and received its town privileges in 1499. From 1569 it was a capital of the Minsk Voivodship in the Polish-Lithuanian Commonwealth. It was annexed by Russia in 1793 as a consequence of the Second Partition of Poland. During 1919–1991 Minsk was the capital of the Byelorussian SSR.

All content from Kiddle encyclopedia articles (including the article images and facts) can be freely used under Attribution-ShareAlike license, unless stated otherwise. Cite this article:
Minsk Facts for Kids. Kiddle Encyclopedia.