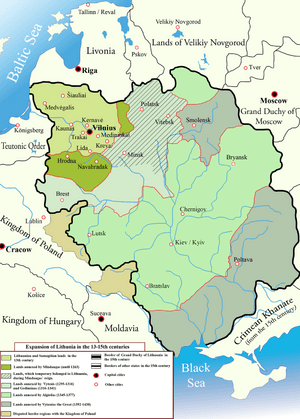 Grand Duchy of Lithuania in the 13–15th centuries 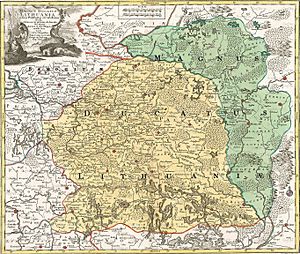 The Grand Duchy of Lithuania was a European state from the 12th –13th century until 1569. In 1569 it became a part of the Polish–Lithuanian Commonwealth until 1791. It was started by the Lithuanians. The duchy grew to include large parts of the former Kievan Rus' and other Slavic lands. It covered the land of present-day Belarus, Latvia, Lithuania and parts of Estonia, Moldova, Poland, Russia and Ukraine. At its biggest in the 15th century, it was the largest state in Europe. There was great diversity in languages, religion, and cultural heritage.

Bringing together of the Lithuanian lands began in the late 12th century. Mindaugas, the first ruler of the Grand Duchy, was crowned as Catholic King of Lithuania in 1253. The pagan state was targeted in the religious crusade by the Teutonic Knights and the Livonian Order. When Gediminas began to rule, he allowed people to have different religions. This grew under his son Algirdas. In 1386 Jogaila changed the religion to Catholicism. He also made a dynastic union between the Grand Duchy of Lithuania and the Kingdom of Poland.

Vytautas the Great grew the land of the Grand Duchy. He also led the defeat of the Teutonic Knights in the Battle of Grunwald in 1410. After Vytautas's death, Lithuania's relationship with the Kingdom of Poland was not good. The Union of Lublin of 1569 created a new state, the Polish–Lithuanian Commonwealth. In this federation, the Grand Duchy of Lithuania had a separate government, laws, army, and treasury. They were invaded by Russia in 1792. The land was divided out among the Russian Empire, Prussia and Austria in 1795.

All content from Kiddle encyclopedia articles (including the article images and facts) can be freely used under Attribution-ShareAlike license, unless stated otherwise. Cite this article:
Grand Duchy of Lithuania Facts for Kids. Kiddle Encyclopedia.