The Mirsky Castle Complex is a UNESCO World Heritage site in Belarus. It is in the town of Mir. 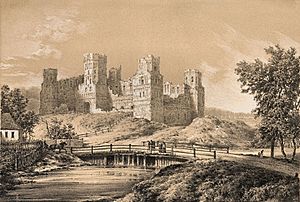 After being not lived in for nearly a century, and having severe damage during the Napoleonic period, the castle was restored at the end of the 19th century. In 1813, after the death of Dominik Hieronim Radziwiłł, his daughter Stefania got the castle. She married Ludwig zu Sayn-Wittgenstein-Berleburg. The castle later went to their daughter Maria, who married Prince Chlodwig Hohenlohe-Schillingsfürst.

During WWII, it came under Nazi control. It was a ghetto for the local Jewish population. Between 1944 and 1956, the castle was used as a housing facility. This partly damaged the castle's inside.

In December, 2000, the Mir Castle was listed by UNESCO as a World Heritage Site.

All content from Kiddle encyclopedia articles (including the article images and facts) can be freely used under Attribution-ShareAlike license, unless stated otherwise. Cite this article:
Mir Castle Complex Facts for Kids. Kiddle Encyclopedia.