Jan Alojzy Matejko also known as Jan Mateyko (June 24, 1838 – November 1, 1893) was a Polish painter known for paintings of notable historical Polish political and military events. His works include large oil on canvas paintings like Rejtan (1866), Union of Lublin (1869) or Battle of Grunwald (1878), numerous portraits, a gallery of Polish kings, and murals in St. Mary's Basilica, Kraków. He is referred to as the most famous Polish painter or even the "national painter" of Poland. 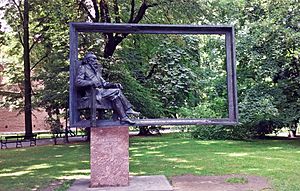 Jan Matejko was born in Kraków (Cracow). on 24 June 1838. His father was Czech musician František Xaver Matějka (in Poland Franciszek Ksawery Matejko), a music teacher. His mother was Joanna Karolina Rossberg, who was half-German. He was never good at school, however, he showed great artistic talent.

Matejko spent most of his life in Kraków. His teachers at the Kraków Academy of Fine Arts included Wojciech Korneli Stattler and Władysław Łuszczkiewicz. Later, he became a director at this institution, which eventually was renamed the Jan Matejko Academy of Fine Arts. A number of his students became famous painters themselves.

Matejko died on 1 November 1893 in Kraków. He is buried at Rakowicki Cemetery in Kraków.

Matejko is famous for his historical paintings. He painted portraits, too, especially those of his children. He also published a book named Portraits of Polish Kings (1890). Most of these portraits are imaginary, meaning he painted kings and princes who lived many centuries before, and that there are no earlier pictures of them.

All content from Kiddle encyclopedia articles (including the article images and facts) can be freely used under Attribution-ShareAlike license, unless stated otherwise. Cite this article:
Jan Matejko Facts for Kids. Kiddle Encyclopedia.