History of Poland facts for kids

The History of Poland is the history of rather different territories during the past millennium. At one time, in the 16th century, the Polish-Lithuanian Commonwealth was the second largest state in Europe, after Russia. At other times there was no separate Polish state at all. Poland got back its independence in 1918, after more than a century of rule by nearby empires, but its borders shifted again after the Second World War.

Poland began to form into a country around the middle of the 10th century in the Piast dynasty. In 966, Prince Mieszko I got himself and the whole Polish nation christened. 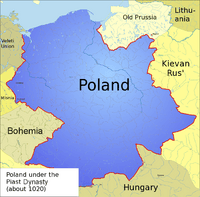 In the 12th century Poland broke into some smaller states, which were later attacked by Mongol armies in 1241. In 1320 Władysław I became the King of the repaired Poland. His son Casimir III repaired the Polish economy, built new castles and won the war against the Ruthenian dukedom. The Black Death, which affected many parts of Europe from 1347 to 1351, did not come to Poland. 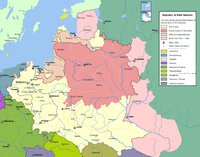 The Polish-Lithuanian Union when it was largest.

Beginning with the Lithuanian Grand Duke Jogaila, the Jagiellon dynasty (1385–1569) formed the Polish-Lithuanian Union. The partnership proved beneficial for the Poles and Lithuanians, who played a dominant role in one of the most powerful empires in Europe for the next three centuries. The Nihil novi act adopted by the Polish Sejm (parliament) in 1505, transferred most of the legislative power from the Monarch to the Sejm. This event marked the beginning of the period known as "Nobility Commonwealth" when the State was ruled by the "free and equal" Polish nobility. The Lublin Union of 1569, established the Polish-Lithuanian Commonwealth as an influential player in European politics and a vital cultural entity.

In the 17th century Sweden attacked all of Poland (this was called “the Deluge”). Many wars against the Ottoman Empire, Russia, Cossacks, Transylvania and Brandenburg-Prussia ended with the Treaty of Karlowitz in 1699. During the following 80 years, the government and natione were weaker, making Poland dependent on Russia. Russian tsars took advantage of this by offering money to traitors, who would block new ideas and solutions. Russia, Prussia, and Austria broke Poland into three pieces in 1772, 1793 and 1795, which dissolved the country. Polish people did not like the new kings, and often rebelled. 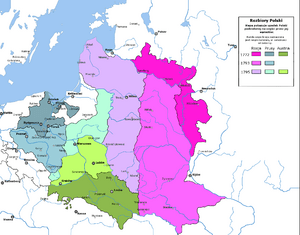 In 1791, in an attempt of reform the Sejm of Poland and Lithuania accepted the Constitution of May 3 which was the first modern constitution in Europe and the second (after the United States) on Earth. But that did not help against the partitions of Poland in 1793 and 1795.

Napoleon made another Polish state, “the Dutchy of Warsaw”, but after the Napoleonic Wars, Poland was split again by the countries at the Congress of Vienna. The eastern part was ruled by the Russian tsar. 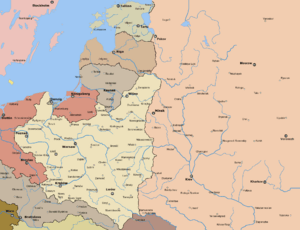 During World War I all Western Allies agreed to save Poland. Soon after the surrender of Germany in November 1918, Poland became the Second Polish Republic (II Rzeczpospolita Polska). It got its freedom after several military conflicts; the largest was in 1919-1921 Polish-Soviet War.

On September 1, 1939, Nazi Germany attacked Poland, and the Soviet Union attacked on September 17. Warsaw was defeated on September 28, and was split up into two pieces, one owned by Nazi Germany, the other by the Soviet Union. The eastern part of the German zone was turned into the German Government area. Out of all the countries that were in the war, Poland lost the highest amount of its people: over 6 million died, half of them Polish Jews. Poland also gave the most troops, after the US, the British and the Soviets, to ultimately defeat Nazi Germany. At the war's end, Poland's borders were moved west, pushing the east border to the Curzon line. The west border was moved to the Oder-Neisse line. The new Poland became 20% smaller by 77,500 square kilometeres (29,900 sq mi). The shift forced millions of people to move: Poles, Germans, Ukrainians, and Jews. After these events, Poland became, for the first time, a real country. There are still many Polish in the neighboring countries Ukraine, Belarus, and Lithuania, as well as in other countries. The most Poles outside of Poland are in the United States, especially in Chicago.

Post-communist and the EU

During the early 1990s the country turned its economy into one of the most solid in Central Europe. There were many improvements in human rights, such as free speech, democracy, etc. In 1991 Poland became a member of the Visegrad Group and joined NATO in 1999 also with the Czech Republic and Hungary. Polish voters then voted to join the European Union in a vote in June 2003. The country joined the EU on May 1, 2004.

All content from Kiddle encyclopedia articles (including the article images and facts) can be freely used under Attribution-ShareAlike license, unless stated otherwise. Cite this article:
History of Poland Facts for Kids. Kiddle Encyclopedia.