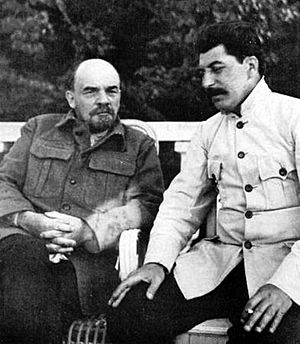 Manipulated photo intended to show Vladimir Lenin with Stalin in the early 1920s.

Stalinism is the means of governing and related policies implemented from 1927 to 1953 by Joseph Stalin (1878–1953). Stalinist policies and ideas that were developed in the Soviet Union included rapid industrialization, the theory of socialism in one country, a totalitarian state, collectivization of agriculture, a cult of personality and subordination of the interests of foreign communist parties to those of the Communist Party of the Soviet Union, deemed by Stalinism to be the leading vanguard party of communist revolution at the time.

Stalinism promoted the escalation of class conflict, utilizing state violence to forcibly purge society of the bourgeoisie, whom Stalinist doctrine regarded as threats to the pursuit of the communist revolution. This policy resulted in substantial political violence and persecution of such people. "Enemies" included not only bourgeois people, but also working-class people with counter-revolutionary sympathies.

Stalinist industrialization was officially designed to accelerate the development towards communism, stressing the need for such rapid industrialization on the grounds that the Soviet Union was previously economically backward in comparison to Western countries and asserting that socialist society needed industry in order to face the challenges posed by internal and external enemies of communism. Rapid industrialization was accompanied by mass collectivization of agriculture and by rapid urbanization. Rapid urbanization converted many small villages into industrial cities. To accelerate the development of industrialization, Stalin imported materials, ideas, expertise and workers from Western Europe and the United States and pragmatically set up joint-venture contracts with major American private enterprises, such as the Ford Motor Company, which under state supervision assisted in developing the basis of the industry of the Soviet economy from the late 1920s to the 1930s. After the American private enterprises had completed their tasks, Soviet state enterprises took over.

All content from Kiddle encyclopedia articles (including the article images and facts) can be freely used under Attribution-ShareAlike license, unless stated otherwise. Cite this article:
Stalinism Facts for Kids. Kiddle Encyclopedia.