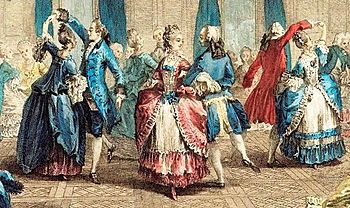 Bourgeoisie means a social class of people who own the means of production, making them in the upper or merchant class. Hence, all employers are bourgeoisie. Their status or power comes from employment, education, assets, or wealth and not from aristocratic (political) origin, as a lowly café or factory owner is bourgeoisie. The term is widely used in many non-English speaking countries as an approximate equivalent of middle class.

As the bourgeoisie are not its opposing counterpart proletariat, they don't have to be a labourer doing menial work for money. And if they do any work that gets them money, then it's only because of the many proletariat people beneath them, who generated their wealth through their labour, of which the higher up bourgeoisie person took a cut (commission).

All content from Kiddle encyclopedia articles (including the article images and facts) can be freely used under Attribution-ShareAlike license, unless stated otherwise. Cite this article:
Bourgeoisie Facts for Kids. Kiddle Encyclopedia.