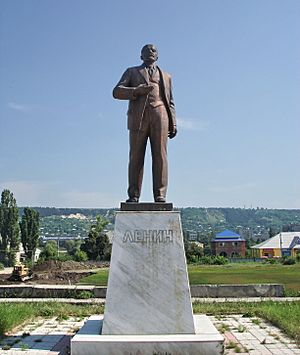 A statue of Lenin, in Ataki.

Leninism is a way of thinking about how the communist party should be organized. It says it should be a dictatorship of the proletariat (the working class holds the power). It is thought to be one of the first steps towards socialism (where the workers own the factories, etc.). It is one part of Marxism–Leninism, which emphasizes the transition from capitalism to socialism.

Vladimir Lenin was a Russian Marxist. He had a set of ideas based on Marxism. Lenin's development of Marxism has become known as Leninism. These ideas include:

All content from Kiddle encyclopedia articles (including the article images and facts) can be freely used under Attribution-ShareAlike license, unless stated otherwise. Cite this article:
Leninism Facts for Kids. Kiddle Encyclopedia.