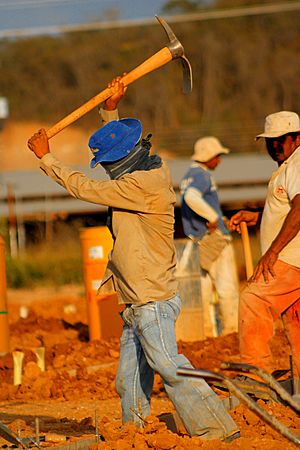 A manual laborer at work in Venezuela. Manual laborers are generally considered to be part of the proletariat. 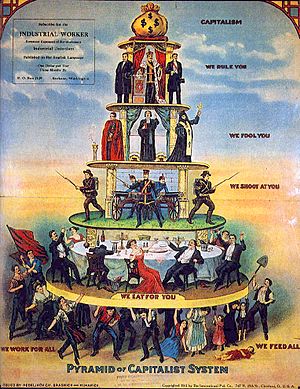 A 1911 Industrial Worker publication advocating industrial unionism based on a critique of capitalism. The proletariat "work for all" and "feed all".

The proletariat (often shortened, "prole" in slang) is a term used by communists for a segment of society. It describes the class of workers in urban areas who work in industry or manufacturing. These urban workers are different from the peasants, who are workers who do farming jobs in rural areas.

The political way of thinking of communism states that the proletariat should have a revolution and take over the means of production. They are often sarcastically referred to as "wage-slaves."

The proletariat is the laboring bulk of society that does most of the useful, necessary work, and pays most of the taxes. It is also perceived by "capitalists" (another communist term) as being necessary for those reasons: labor and taxes, plus being available to exploit to produce profits.

All content from Kiddle encyclopedia articles (including the article images and facts) can be freely used under Attribution-ShareAlike license, unless stated otherwise. Cite this article:
Proletariat Facts for Kids. Kiddle Encyclopedia.