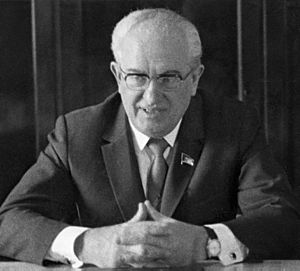 Andropov's identity card as Director of the KGB

Yuri Vladimirovich Andropov (1914-1984) was a Soviet politician. He was born in Nagutskoye, Russian SFSR.

Andropov was Director of the KGB for an unusually long time: 1967–1982 (Jan-May). He was General Secretary of the CPSU from November 12, 1982 until his death fifteen months later. He had diabetes mellitus and died of renal failure in Moscow, Russian SFSR.

All content from Kiddle encyclopedia articles (including the article images and facts) can be freely used under Attribution-ShareAlike license, unless stated otherwise. Cite this article:
Yuri Andropov Facts for Kids. Kiddle Encyclopedia.