Hungarian Revolution of 1956 facts for kids 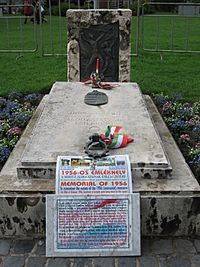 Memorial to the 1956 Hungarian Revolution.

The Hungarian Revolution of 1956 or Hungarian Uprising of 1956 (Hungarian: 1956-os forradalom or felkelés) was a spontaneous nationwide revolt. It was against the government of the Hungarian People's Republic and its Soviet-imposed policies. It lasted from 23 October until 10 November 1956. It was the first major threat to Soviet control since the USSR's forces drove out the Nazis at the end of World War II and took over Eastern Europe. Despite the failure of the uprising, it was highly influential. It played a role in the fall of the Soviet Union decades later.

At the end of World War II Hungary was liberated from the Nazis. It was occupied by the Soviet Union’s Red Army. Hungary's communists were led by General Secretary Mátyás Rákosi and backed by Joseph Stalin. The communists destroyed all political opposition. In 1949 Hungary officially became the People’s Republic of Hungary. Rákosi was an oppressive ruler. He exiled, imprisoned or killed over 300,000 Hungarians. After Stalin died, the soviet communists replaced Rákosi with Imre Nagy. They felt his softer approach would win them popularity. But the Kremlin decided he had become too popular. Rákosi was returned to power in April 1955. His secret police, the AVO, carried out Rákosi's oppressive orders again. The Hungarian people grew more and more tired of communist rule.

When it broke out in October 1956, the Hungarian revolt was a sudden explosion. It wasn't organized by any group. Nobody had any idea it would sweep the country and break out everywhere all at once. However, there were warning signs that trouble was coming. The Communist Party in Hungary had lost much of its authority and respect. In July of 1956 Rákosi was removed again as leader of the party. He was sent back to the Soviet Union.

Thousands of Hungarians died and thousands were imprisoned. Hundreds of Soviet troops died. Over a hundred thousand Hungarians fled to countries outside the Eastern Bloc. Communists in the Western Bloc disagreed on whether crushing the rebellion was a good idea.

All content from Kiddle encyclopedia articles (including the article images and facts) can be freely used under Attribution-ShareAlike license, unless stated otherwise. Cite this article:
Hungarian Revolution of 1956 Facts for Kids. Kiddle Encyclopedia.