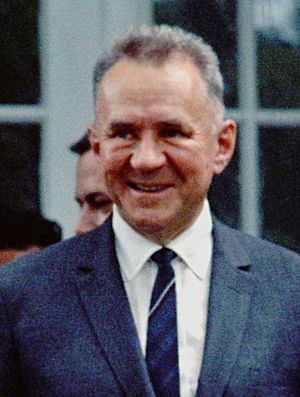 Alexei Nikolayevich Kosygin (Russian: Алексе́й Никола́евич Косы́гин, Aleksej Nikolajevič Kosygin; 21 February 1904 – 18 December 1980) was a Russian man who was Premier of the Soviet Union. He was a friend of the previous Prime Minister, Nikita Khrushchev. He and Leonid Brezhnev led the country together until he died.

All content from Kiddle encyclopedia articles (including the article images and facts) can be freely used under Attribution-ShareAlike license, unless stated otherwise. Cite this article:
Alexei Kosygin Facts for Kids. Kiddle Encyclopedia.