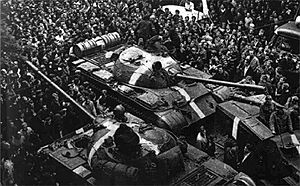 Protestors encircle two Soviet tanks, during the first days of the Soviet invasion in Czechoslovakia

Prague Spring symbolizes the experiment of establishing of a socialism with a human face, in postwar Eastern Bloc and its violent suppression from Warsaw Pact countries in August 21, 1968. The event is included in a greater series of Cold War-related unrests. Some examples are May 1968 in France, the student protests against Vietnam War and the military junta in Greece (1967-1974).

After the invasion, the most reforms who took place during Prague Spring were reversed or halted. This period after Prague Spring is known as normalization. The only exception was the federalisation of Czechoslovakia. Czechoslovakia became officialy a federal country on January 1, 1969.

All content from Kiddle encyclopedia articles (including the article images and facts) can be freely used under Attribution-ShareAlike license, unless stated otherwise. Cite this article:
Prague Spring Facts for Kids. Kiddle Encyclopedia.