Konstantin Ustinovich Chernenko (24 September 1911 – 10 March 1985) was a Soviet politician and the fifth General Secretary of the Communist Party of the Soviet Union. He led the Soviet Union from 13 February 1984 until his death thirteen months later, on 10 March 1985. Chernenko was also Chairman of the Presidium of the Supreme Soviet from 11 April 1984 until his death. 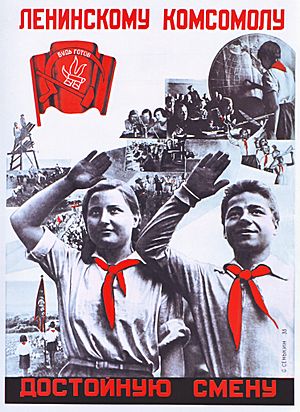 Chernenko was born to a poor family in the Siberian village of Bolshaya Tes, Krasnoyarsk Krai). His father, Ustin Demidovich (of Ukrainian origin), worked in copper mines and gold mines while his mother took care of the farm work.

Chernenko joined the Komsomol (Communist Youth League) in 1929, and became a full member of the Communist Party in 1931. From 1930 to 1933, he served in the Soviet frontier guards on the Soviet–Chinese border. After completing his military service, he returned to Krasnoyarsk as a propagandist. In 1933 he worked in the Propaganda Department of the Novosyolovsky District Party Committee. A few years later he was promoted to head of the same department in Uyarsk Raykom.

Chernenko then steadily rose through the Party ranks, becoming the Director of the Krasnoyarsk House of Party Enlightenment, then in 1939 the Deputy Head of the Agitprop Department of Krasnoyarsk Territorial Committee, and finally in 1941 Secretary of the Territorial Party Committee for Propaganda. In the 1940s he established a close relationship with Fyodor Kulakov. In 1945, he acquired a diploma from a party training school in Moscow, and in 1953 he finished a correspondence course for schoolteachers.

The turning point in Chernenko’s career was his assignment in 1948 to head the Communist Party’s propaganda department in the Moldavian Soviet Socialist Republic. There, he met and won the confidence of Leonid Brezhnev, the first secretary of the Moldavian SSR from 1950 to 1952 and future leader of the Soviet Union. Chernenko followed Brezhnev in 1956 to fill a similar propaganda post in the CPSU Central Committee in Moscow. In 1960, after Brezhnev was named chairman of the Presidium of the Supreme Soviet (formal position of head of state of the Soviet Union), Chernenko became his chief of staff. 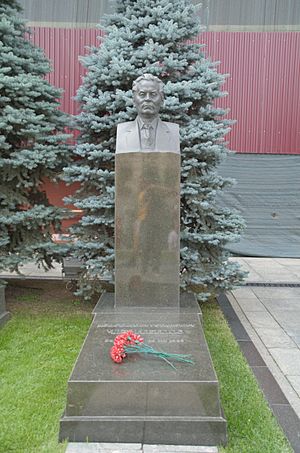 Chernenko's grave at the Kremlin Wall Necropolis in Moscow

Chernenko started smoking at the age of nine, and he was always known to be a heavy smoker as an adult. Long before his election as general secretary, he had developed emphysema and right-sided heart failure. In 1983 he had been absent from his duties for three months due to bronchitis, pleurisy and pneumonia.

In early 1984, Chernenko was hospitalised for over a month but kept working by sending notes and letters. During the summer, his doctors sent him to Kislovodsk for the mineral spas, but on the day of his arrival at the resort Chernenko's health deteriorated, and he contracted pneumonia. Chernenko did not return to the Kremlin until later in 1984. He awarded Orders to cosmonauts and writers in his office, but was unable to walk through the corridors of his office and was driven in a wheelchair.

By the end of 1984, Chernenko could hardly leave the Central Clinical Hospital, a heavily guarded facility in west Moscow. Chernenko's illness was first acknowledged publicly on 22 February 1985.

Emphysema and the associated lung and heart damage worsened significantly for Chernenko in the last three weeks of February 1985. On the morning of 10 March 1985 Chernenko fell into a coma and died later that evening. He was 73 years old.

Chernenko became the third Soviet leader to die in less than three years. Upon being informed in the middle of the night of his death, U.S. President Ronald Reagan is reported to have remarked "How am I supposed to get anyplace with the Russians if they keep dying on me?"

Chernenko was honored with a state funeral and was buried in the Kremlin Wall Necropolis. He is the last person to have been interred there.

After the death of a Soviet leader it was customary for his successors to open his safe. When Gorbachev had Chernenko's safe opened, it was found to contain a small folder of personal papers and several large bundles of money; a large amount of money was also found in his desk. It is not known where he had obtained the money or what he intended to use it for. 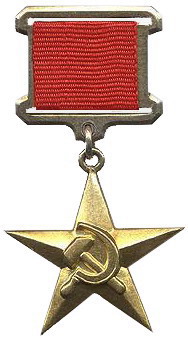 Chernenko was awarded the Order of the Red Banner of Labour, 1976, in 1981 and in 1984 he was awarded Hero of the Socialist Labour, in 1981 he was awarded with the Bulgarian Order of Georgi Dimitrov and in 1982 he received the Lenin Prize for his "Human Rights in Soviet Society".

All content from Kiddle encyclopedia articles (including the article images and facts) can be freely used under Attribution-ShareAlike license, unless stated otherwise. Cite this article:
Konstantin Chernenko Facts for Kids. Kiddle Encyclopedia.