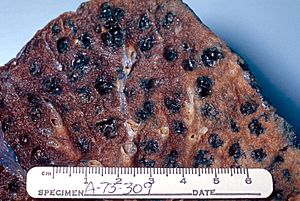 A section of a deceased person's lung that shows severe emphysema. The black "bubbles" are emphysemous alveoli that have expanded and become filed with black carbon that is from smoking 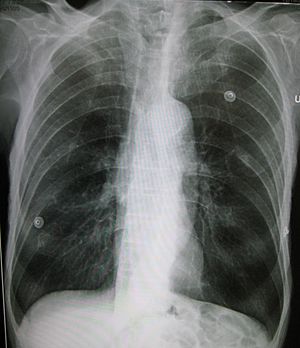 A thoracic X-ray of a person with emphysema. At the arrow in the left lung (right side of picture) can be seen a faint bubbly section that looks like a ghostly bunch of grapes. This is emphysema

This microscope image shows the very large expanded sections of lung tissue. These "holes" should be tiny and there should be thousands of them, instead of only hundreds

Emphysema is a disease of the lungs.

It is one of the diseases that make up chronic obstructive pulmonary disease (COPD). This is a set of diseases where the flow of air in the lungs is obstructed. Emphysemia is most often caused by smoking but can be caused by other diseases or have no known cause at all.

It occurs when the very small air sacs (called the alveoli) at the ends of the airways in the lungs start to break down from many sacs to form much bigger sacs. The alveoli are the areas of the lung where oxygen and carbon dioxide are exchanged into and out of the blood. Emphysema makes it hard for people to blow air out of the lungs because air gets trapped inside the broken alveoli due to the collapse of the walls. The trapped air in the lungs creates the characteristic "barrel chest" of emphysema.

There is no cure for emphysema. Treatment includes stopping smoking and taking medicines ('broncho-dilators' and sometimes corticosteroids). Supplemental oxygen is recommended in those with low oxygen levels at rest. It decreases the risk of heart failure and death if used 15 hours per day, and may improve people's ability to exercise. In those with normal or mildly low oxygen levels, oxygen supplementation may improve shortness of breath. There is a risk of fires and little benefit when those on oxygen continue to smoke. 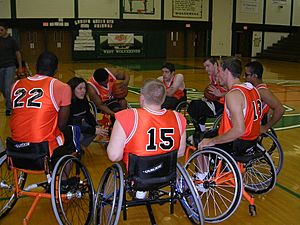 Emphysema is commonly associated with chronic bronchitis. As it is rather difficult to delineate "pure" cases of emphysema or chronic bronchitis they are classed together into chronic obstructive pulmonary disease (COPD).

All content from Kiddle encyclopedia articles (including the article images and facts) can be freely used under Attribution-ShareAlike license, unless stated otherwise. Cite this article:
Emphysema Facts for Kids. Kiddle Encyclopedia.