The KGB, an initialism for Komitet gosudarstvennoy bezopasnosti, translated in English as Committee for State Security, was the main security agency for the Soviet Union from 1954 until its break-up in 1991. As a direct successor of such agencies as Cheka, NKGB, NKVD and MGB, the committee was attached to the Council of Ministers. It was the chief government agency of "union-republican jurisdiction", acting as internal security, intelligence and secret police.

The agency was a military service governed by army laws and regulations, in the same fashion as the Soviet Army or MVD Internal Troops. While most of the KGB archives remain classified, two online documentary sources are available. Its main functions were foreign intelligence, counter-intelligence, operative-investigatory activities, guarding the State Border of the USSR, guarding the leadership of the Central Committee of the Communist Party and the Soviet Government, organization and ensuring of government communications as well as combating nationalism, dissent, and anti-Soviet activities.

In 1991, after the dissolution of the Soviet Union, the KGB was split into the Federal Security Service and the Foreign Intelligence Service of the Russian Federation.

Vladimir Putin, worked at the KGB in Leningrad. 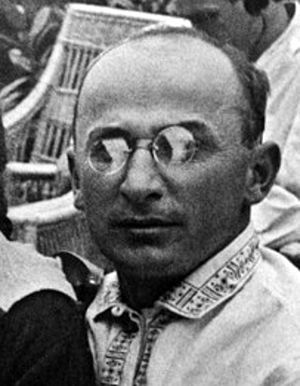 During the Cold War, the KGB actively sought to combat "ideological subversion" – anti-communist political and religious ideas and the dissidents who promoted them. It was Soviet policy for the KGB (and the secret services of the satellite states) to monitor public and private opinion, internal subversion and possible revolutionary plots in the Soviet Bloc.

The KGB was instrumental in crushing the Hungarian Revolution of 1956, and the Prague Spring of "Socialism with a Human Face", in 1968 Czechoslovakia. A record of some of its doings is contained in the Mitrokin Archive.

On 5 July 1978 the KGB was renamed as the "KGB of the Soviet Union", with its chairman holding a ministerial council seat. The KGB ended when its chief, Colonel-General Vladimir Kryuchkov, used the KGB's resources to help the August 1991 coup attempt to overthrow Soviet President Mikhail Gorbachev.

On 23 August 1991 Colonel-General Kryuchkov was arrested, and General Vadim Bakatin was appointed KGB Chairman—and mandated to dissolve the KGB of the Soviet Union.

On 6 November 1991, the KGB officially ceased to exist, although Russia's new national security organisation, the Russian Federalnaya sluzhba bezopasnosti (FSB), works in the same things that the Soviet KGB did.

Belarus is the only post-Soviet Union era country where the national security organization is still called "KGB". Belarus is where Felix Dzerzhinsky started a group called the Cheka, which was an organization in the Soviet Union before the MVD or the KGB was started. 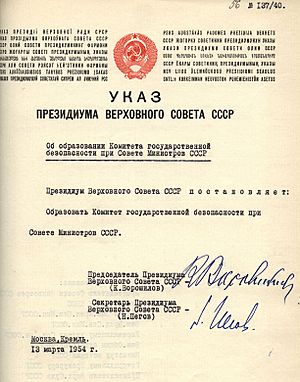 The ukase establishing the KGB

A Time magazine article in 1983 reported that the KGB was the world's most effective information-gathering organization. It operated legal and illegal espionage residencies in target countries where a legal resident gathered intelligence while based at the Soviet embassy or consulate, and, if caught, was protected from prosecution by diplomatic immunity. In its early history, the KGB valued illegal spies more than legal spies, because illegal spies infiltrated their targets with greater ease.

The KGB used four types of espionage: (i) political, (ii) economic, (iii) military-strategic, and (iv) disinformation, effected with "active measures" such as counter-intelligence and security, and scientific–technological intelligence.

Soviet espionage was at its most successful in collecting scientific and technological intelligence about advances in jet propulsion, radar and encryption, which impressed Moscow, but stealing atomic secrets was the capstone of NKVD espionage against Anglo–American science and technology. British Manhattan Project team physicist Klaus Fuchs was the main agent of the Rosenberg spy ring. In 1944, the New York City group infiltrated top secret Los Alamos National Laboratory in New Mexico by recruiting Theodore Hall, a 19-year-old Harvard physicist.

Yuri Andropov's identity card as Director of the KGB

According to declassified documents, the KGB aggressively recruited former Nazi intelligence officers after the war. The KGB used them to penetrate the West German intelligence service.

In the 1960s, acting upon the information of KGB defector Anatoliy Golitsyn, the CIA counter-intelligence chief James Jesus Angleton believed KGB had moles in two key places—the counter-intelligence section of CIA and the FBI's counter-intelligence department. The captures of the moles Aldrich Ames and Robert Hanssen proved that Angleton was correct, despite the fact that it cost him his job at CIA, which he left in 1975. 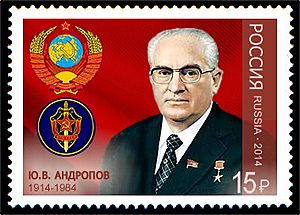 KGB "Yuri Andropov" on a stamp

In the mid-1970s, the KGB tried to secretly buy three banks in northern California to gain access to high-technology secrets. Their efforts were thwarted by the CIA. The banks were Peninsula National Bank in Burlingame, the First National Bank of Fresno, and the Tahoe National Bank in South Lake Tahoe. These banks had made numerous loans to advanced technology companies and had many of their officers and directors as clients. The KGB used the Moscow Narodny Bank Limited to finance the acquisition, and an intermediary, Singaporean businessman Amos Dawe, as the frontman.

All content from Kiddle encyclopedia articles (including the article images and facts) can be freely used under Attribution-ShareAlike license, unless stated otherwise. Cite this article:
KGB Facts for Kids. Kiddle Encyclopedia.