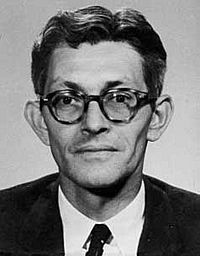 James Jesus Angleton (December 9, 1917 – May 12, 1987) was chief of CIA counterintelligence from 1954 to 1975. His official title was Associate Deputy Director of Operations for Counterintelligence (ADDOCI). He started towards the end of World War II, and worked in Italy for the OSS (Office of Strategic Services) after the war. Returning to Washington DC, he became one of the founding members of the CIA in 1949.

The peak of his career was in detecting "moles", that is, foreign spies in American and western secret services. The 1970s Church Committee of the US Senate established that Angleton was in charge of the domestic spying activities of the CIA under 'Operation CHAOS'.

Eventually he was fired when he accused several western prime ministers of aiding the Soviet Union, and the anti-war and civil rights movements of the 1960s and 1970s as having foreign funding.

All content from Kiddle encyclopedia articles (including the article images and facts) can be freely used under Attribution-ShareAlike license, unless stated otherwise. Cite this article:
James Jesus Angleton Facts for Kids. Kiddle Encyclopedia.