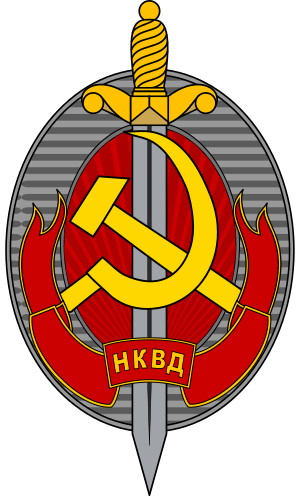 Emblem of the NKVD

The NKVD (People's Commissariat for Internal Affairs) was a government department in the Soviet Union. It was the law enforcement agency which did the will of the All Union Communist Party. The NKVD underwent many organizational changes; between 1938 and 1939 alone, the NKVD's structure changed three times.

The public face of the NKVD was the regular police force, which acted in a similar way to other police forces. In addition to its state security and police functions, some of its departments handled other matters, such as transportation, fire guards, border guards (NKVD border troops), etc. These jobs were usually assigned to the Ministry of the Interior (MVD).

However, it is the classified (secret) activities for which it was really feared. This was the work of the Main Directorate for State Security, known as the GUGB. The NKVD also included the Soviet secret police. The GUGB protected the state security of the Soviet Union. This was done by massive political repression, including the use of sanctioned political murders and assassinations, especially in the era of Joseph Stalin, during the Great Purge.

All content from Kiddle encyclopedia articles (including the article images and facts) can be freely used under Attribution-ShareAlike license, unless stated otherwise. Cite this article:
NKVD Facts for Kids. Kiddle Encyclopedia.