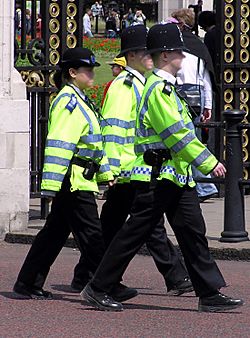 Police are a group of people whose job it is to enforce laws, help with emergencies, solve crimes and protect property. People who work for the police are called police officers or policemen. They work out of a police station. Police are trained in first aid and rescue, because police officers are often one of the first people to get to a place where people are sick or injured, such as a car accident, or a fire.

The police have different powers to help them do their job. These powers are different in different countries. Most police officers have the power to arrest people, search people, and search houses/properties. They sometimes carry equipment such as guns, batons and pepper spray. The area where a police officer can use these powers is called their jurisdiction. If the officer goes outside of his jurisdiction, they are no longer allowed to use his powers. Another police force has to then take over. 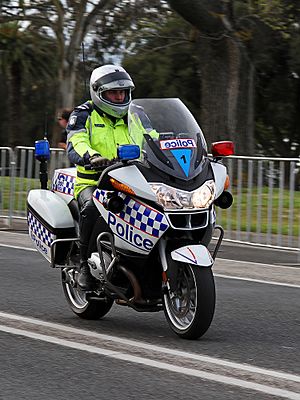 Police motorcycles are commonly used for patrols and escorts, as seen here in Australia

The police deal with;

Not all countries use the same words to describe these groups. In the United Kingdom, for example, patrol officers form the "uniform branch", while detectives work within the CID ("Criminal Investigation Department"). Police uniforms, equipment and methods can change a lot depending on the country. In some areas, groups of police are train for special jobs such as dealing with riots or when a situation is very bad. 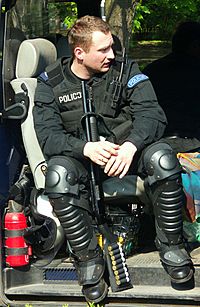 A Polish police officer with some of his equipment

Different countries have different names for their police. In Ireland, they are called the Garda. In Russia, they were called the Militsiyer until 2012; now, they are called the Politsiyer, closer to the English "police". Other names for police services are sheriff's office, marshal's office or department of public safety. In the same country there can be different types of police officer who have powers in different areas and situations, such as state police, military police and local police. Worldwide, police make up a small percentage of the people they serve. On average there are 303.3 police officers per 100,000 population. 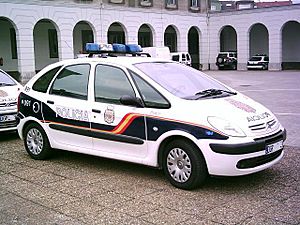 In most countries, police officers have been trained to carry guns. Even in countries like the United Kingdom, New Zealand and the Republic of Ireland where most police officers do not carry guns, more are being trained to do so because gun crime is getting worse. Firearms training teaches that the use of a firearm is only when lives are at risk.

All content from Kiddle encyclopedia articles (including the article images and facts) can be freely used under Attribution-ShareAlike license, unless stated otherwise. Cite this article:
Police Facts for Kids. Kiddle Encyclopedia.