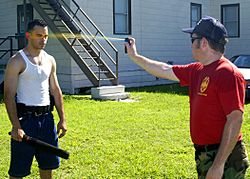 Pepper spray (also called OC spray, from Oleoresin capsicum) is a spray used for self-defence, by spraying it into an attacker's face. It makes eyes water and causes intense pain, sometimes even leading to temporary blindness. Pepper spray is an inflammatory agent. When someone is sprayed with pepper spray, their eyes will close and they will have difficulty breathing, a runny nose, and cough. The stronger the spray is, the longer the effects last, but the average full effect lasts around thirty to forty-five minutes, with longer effects lasting for hours. Pepper spray is mostly used by police forces for riot control, but in some countries people can use it for self-defence.

The active ingredient in pepper spray is capsaicin, a chemical found in capsicums, chillis and other members of the pepper family.

Pepper spray usually comes in canisters and can be sprayed up to twenty-five metres.

All content from Kiddle encyclopedia articles (including the article images and facts) can be freely used under Attribution-ShareAlike license, unless stated otherwise. Cite this article:
Pepper spray Facts for Kids. Kiddle Encyclopedia.