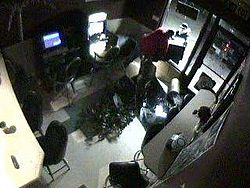 A robbery at a convenience store.

A robbery is the act of stealing from a person using violence or by causing fear of violence. A person who commits robbery is known as a robber.

A person who steals without using violence or fear (such as stealing items from a store, or pickpocketing, or car theft), commits theft, not robbery.

In some US states, however, Simple Robbery refers to the knowing procurement of an item or items belonging to another by force but without “aggravating factors” such as violence or weapons.

All content from Kiddle encyclopedia articles (including the article images and facts) can be freely used under Attribution-ShareAlike license, unless stated otherwise. Cite this article:
Robbery Facts for Kids. Kiddle Encyclopedia.