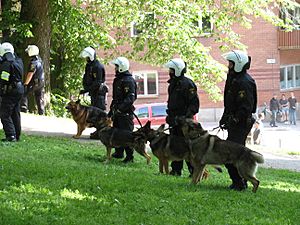 Swedish police dogs during nationalist demonstrations on National Day in 2007 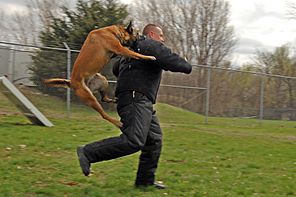 Police dog being trained to attack

A police dog (also called a K-9) is a dog trained to help police and other law enforcement people. German Shepherds are the most common breed, but other breeds are also used. If a police dog is killed in duty, it is usually given a full police funeral. K-9s are often given their own ballistic vests, and some are given their own police IDs and badges.

What can police dogs do?

A police dog may be trained to do one special thing, or a few different things. Common K-9 jobs include:

There are also specialized police dogs, who are used only for a specific job because they have special skills or training for that job. For example: 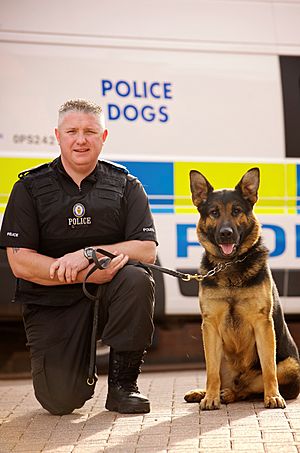 Different breeds of police dogs tend to be good at different things. However, any good police dog should be intelligent, aggressive, strong, and have a good sense of smell. Many police dogs are male and unneutered (because neutering can make a dog less aggressive). However, there are female police dogs, which are used for rescue, tracking, and locating bombs and drugs. German Shepherd Dogs and Belgian Malinois are the most commonly used; however, other dog breeds (and their specialties) include:

All content from Kiddle encyclopedia articles (including the article images and facts) can be freely used under Attribution-ShareAlike license, unless stated otherwise. Cite this article:
Police dog Facts for Kids. Kiddle Encyclopedia.