Dobermann or Doberman Pinscher is a medium to large dog breed. It originated in Germany about 1890. It was named after a tax collector, Friedrich Louis Dobermann (1834-1894), who wanted a dog as a companion and for protection. Doberman Pinschers are known as being very intelligent, loyal and fearless dogs. They are used by police forces, search and rescue dogs, guard dogs and as guide dogs for blind people.

Breed standards describe Doberman Pinschers as dogs of medium-large size with a square build and short coat. They are compactly built and athletic with endurance and swiftness. The Doberman Pinscher should have a proud, watchful, determined, and obedient temperament. The dog was originally intended as a guard dog, so males should have a masculine, muscular, noble appearance. Females are thinner, but should not be spindly.

Although the breed standards vary among kennel and breed clubs, according to the FCI standard the dog typically stands between 68 to 72 centimetres (27 to 28 in), and The Kennel Club in the UK quote 69 centimetres (27 in) as being ideal; the female is typically somewhere between 63 to 68 centimetres (25 to 27 in), 65 centimetres (26 in) being ideal. The Doberman has a square frame: its length should equal its height to the withers, and the length of its head, neck and legs should be in proportion to its body.

There are no standards for the weight of the Doberman Pinscher except as given in the standard used by the FCI. The ideal dog must have sufficient size for an optimal combination of strength, endurance and agility. The male generally weighs between 40–45 kilograms (88–99 lb) and the female between 32–35 kilograms (71–77 lb).

Expression of the color dilution gene is a disorder called Color Dilution Alopecia. Although not life-threatening, these dogs can develop skin problems.

In 1976, a "white" Doberman Pinscher was whelped, and was subsequently bred to her son, who was also bred to his litter sisters. This tight inbreeding continued for some time to allow the breeders to "fix" the mutation. White Dobermans are a cream color with pure white markings and icy blue eyes. Although this is consistent with albinism, the proper characterization of the mutation is currently unknown. The animals are commonly known as tyrosinase-positive albinoids, lacking melanin in oculocutaneous structures. This condition is caused by a partial deletion in gene SLC45A2.

The Doberman Pinscher's natural tail is fairly long, but individual dogs often have a short tail as a result of docking, a procedure in which the majority of the tail is surgically removed shortly after birth. 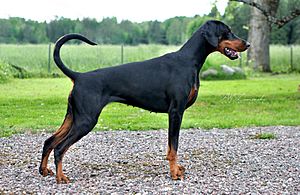 The practice of docking has been around for centuries, and is older than the Doberman as a breed. The putative reason for docking is to ensure that the tail does not get in the way of the dog's work. Docking has always been controversial. The American Kennel Club standard for Doberman Pinschers includes a tail docked near the 2nd vertebra. Docking is a common practice in the United States, Russia and Japan (as well as a number of other countries with Doberman populations), where it is legal. In many European countries and Australia, docking has been made illegal, and in others it is limited.

Doberman Pinschers often have their ears cropped, as do many other breeds, a procedure that is functionally related to breed type for both the traditional guard duty and effective sound localization. According to the Doberman Pinscher Club of America, ears are "normally cropped and carried erect". Like tail docking, ear cropping is illegal in some countries. 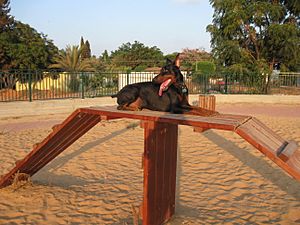 A Doberman Pinscher in a dog park in Hod Hasharon, Israel

Canine intelligence is an umbrella term that encompasses the faculties involved in a wide range of mental tasks, such as learning, problem-solving, and communication. The Doberman Pinscher has ranked amongst the most intelligent of dog breeds in experimental studies and expert evaluations. For instance, psychologist Stanley Coren ranks the Doberman as the 5th most intelligent dog in the category of obedience command training, based on the selective surveys he performed of some trainers (as documented in his book The Intelligence of Dogs). Additionally, in two studies, Hart and Hart (1985) ranked the Doberman Pinscher first in this category. and Tortora (1980) gave the Doberman the highest rank in trainability. Although the methods of evaluation differ, these studies consistently show that the Doberman Pinscher, along with the Border Collie, German Shepherd, Golden Retriever, Standard Poodle and Rottweiler, is one of the most trainable breeds of dog.

Although they are considered to be working dogs, Doberman Pinschers are often stereotyped as being ferocious and aggressive. As a personal protection dog, the Doberman was originally bred for these traits: it had to be large and intimidating, fearless, and willing to defend its owner, but sufficiently obedient and restrained to only do so on command. These traits served the dog well in its role as a personal defense dog, police dog, or war dog, but were not ideally adapted to a companionship role. The Doberman Pinscher's aggression has been toned down by modern breeders over the years, and today's Dobermans are known for a much more even and good natured temperament, extreme loyalty, high intelligence, and great trainability. In fact, the Doberman Pinscher's size, short coat, and intelligence have made it a desirable house dog. The Doberman Pinscher is known to be energetic, watchful, fearless and obedient. 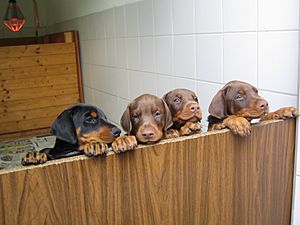 They can easily learn to 'Respect and Protect' their owners, and are therefore considered to be excellent guard dogs that protect their loved ones. They are generally sociable toward humans and can be with other dogs. However, Dobermans rank among the more-likely breeds to show aggressive behaviour toward strangers and other dogs, but not among the most likely to do so. They are very unlikely to show aggressive behaviour toward their owners. 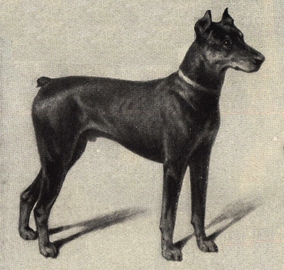 Doberman Pinschers were first bred in the town of Apolda, in the German state of Thuringia around 1890, following the Franco-Prussian War by Karl Friedrich Louis Dobermann. Dobermann served in the dangerous role of local tax collector, and ran the Apolda dog pound. With access to dogs of many breeds, he aimed to create a breed that would be ideal for protecting him during his collections, which took him through many bandit-infested areas. He set out to breed a new type of dog that, in his opinion, would be the perfect combination of strength, speed, endurance, loyalty, intelligence, and ferocity. Later, Otto Goeller and Philip Greunig continued to develop the breed to become the dog that is seen today. 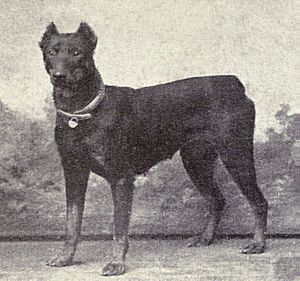 The breed is believed to have been created from several different breeds of dogs that had the characteristics that Dobermann was looking for. The exact ratios of mixing, and even the exact breeds that were used, remain uncertain to this day, although many experts believe that the Doberman Pinscher is a combination of several breeds including the Beauceron, German Pinscher, Rottweiler and Weimaraner. The single exception is the documented crossing with the Greyhound and Manchester Terrier. It is also widely believed that the old German Shepherd gene pool was the single largest contributor to the Doberman breed. Philip Greunig's The Dobermann Pinscher (1939), is considered the foremost study of the development of the breed by one of its most ardent students. Greunig's study describes the breed's early development by Otto Goeller, whose hand allowed the Doberman to become the dog we recognize today. The American Kennel Club believes the breeds utilized to develop the Doberman Pinscher may have included the old shorthaired shepherd, Rottweiler, Black and Tan Terrier and the German Pinscher.

After Dobermann's death in 1894, the Germans named the breed Dobermann-pinscher in his honor, but a half century later dropped the 'pinscher' on the grounds that this German word for terrier was no longer appropriate. The British did the same a few years later.

During World War II, the United States Marine Corps adopted the Doberman Pinscher as its official War Dog, although the Corps did not exclusively use this breed in the role.

In the United States, the American Kennel Club ranked the Doberman Pinscher as the 12th most popular dog breed in 2012 and 2013.

All content from Kiddle encyclopedia articles (including the article images and facts) can be freely used under Attribution-ShareAlike license, unless stated otherwise. Cite this article:
Dobermann Facts for Kids. Kiddle Encyclopedia.