The Rottweiler is a large breed of dog. Their coat of fur is mostly black, with brown on the legs and face. They are excellent guard dogs, as well as herding, and companion dogs.

The Fédération Cynologique Internationale gives the following description of the Rottweiler standard: "Rottweiler breeders aim at a dog of abundant strength, black coated with clearly defined rich tan markings, whose powerful appearance does not lack nobility and which is exceptionally well suited to being a companion, service, rescue and working dog." This breed is all about balance, endurance, proportionality, intelligence and strength. The various standards in place for the Rottweiler's physical appearance specify these characteristics. 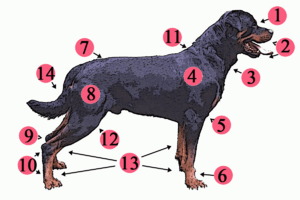 Anatomy of the Rottweiler

Dogs are pack animals. When they feel threatened, they will defend themselves. They will also protect other members of the pack to a certain extent.

There is no specific weight for a Rottweiler to qualify to be judged in dog shows. The dog must be neither too thin or too fat for its size. Both males and females must be "medium-large" in size for the American Kennel Club. The General German Rottweiler Club (ADRK) lists 50 kilograms (110 pounds) for males and 42 kilograms (93 pounds) for females . 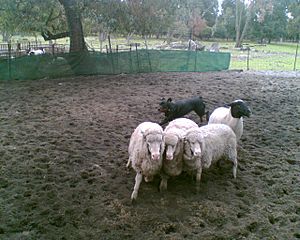 According to the American Kennel Club, Rottweilers have a natural gathering style with a strong desire to control. They generally show a loose eye and have a great amount of force while working well off the stock. They make much use of their ability to intimidate.

The Rottweiler often carries the head on an even plane with the back, or carries the head up but with the neck and shoulders lowered. Some females lower the entire front end slightly when using their eyes. Males also do this when working far off the stock in an open field. This is rarely seen in males when working in confined spaces such as stock yards.

The Rottweiler has a reasonably good natural balance, force-barks when necessary, and when working cattle uses a very intimidating charge. There is a natural change in forcefulness when herding sheep. When working cattle, it may use its body and shoulders and for this reason should be used on horned stock with caution.

The Rottweiler, when working cattle, searches out the dominant animal and challenges it. Upon proving its control over that animal it settles back and tends to its work.

Some growers have found that Rottweilers are especially suited to move stubborn stock that simply ignore Border Collies, Kelpies, and others. Rottweilers use their bodies to physically force the stubborn animal to do its bidding if necessary.

When working with sheep, the Rottweiler shows a gathering/fetching style and reams directions easily. It drives sheep with ease.

In some cases, Rottweilers have begun herding cattle without any experience at all.

If worked on the same stock for any length of time, the Rottweiler tends to develop a bond with the stock and will become quite affectionate with them as long as they do as it directs.

The Rottweiler is also exceptionally suited for and is commonly used in many dog sports including Agility and Schutzhund.

All content from Kiddle encyclopedia articles (including the article images and facts) can be freely used under Attribution-ShareAlike license, unless stated otherwise. Cite this article:
Rottweiler Facts for Kids. Kiddle Encyclopedia.