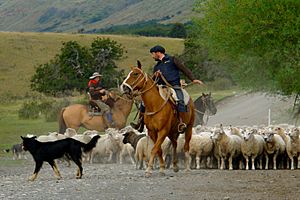 Herding is the act of bringing individual animals together into a group (herd). It is maintaining the group and moving the group from place to place. Many thousands of years ago herding became a way of life for many nomadic people. Today it is still a necessity for farmers, ranchers and those who raise domestic animals.

Some animals instinctively gather together as a herd. A group of animals fleeing a predator will herd together for protection. Some predators, such as wolves and dogs, have instinctive herding abilities that come from primitive hunting instincts. But there can be a fine line between chasing and herding. Dogs that show basic herding instincts can be trained to compete in herding and stock dog trials. It's a sport that dogs and their owners can enjoy together.

Herding is used in agriculture to manage domesticated animals. Herding can be performed by people or dogs trained to control the movement of livestock under the direction of a person. Animals such as cattle, sheep and goats are commonly herded by humans and dogs. Also herd dogs may be used to gather and herd turkey, geese, ducks and chickens.

Originally dogs were used to both herd and guard domestic animals. Over time dogs were bred to specialize in one or the other. Herd guardians or guard dogs became the 24-hour protector of the flock. Herd dogs were developed to keep the herd together. Herding dogs are critical to Australian and British sheep farms.

People who work with agricultural animals have different occupational names. This is based on the type of animal they work with or names that vary by country.

All content from Kiddle encyclopedia articles (including the article images and facts) can be freely used under Attribution-ShareAlike license, unless stated otherwise. Cite this article:
Herding Facts for Kids. Kiddle Encyclopedia.