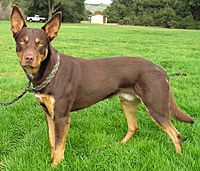 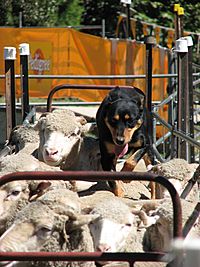 The Australian Kelpie, or simply Kelpie, is an Australian sheepdog. The word 'Kelpie' is Gaelic and means "water sprite". They are very successful at herding and driving livestock with little or no guidance. The Kelpie is a medium-sized dog. They come in both the tan markings and solid colors. The Kelpie has been exported throughout the world and is used mainly to herd sheep, cattle and goats.

The Kelpie can do the work of several men. They are tireless workers and can work all day in the hottest climates. Kelpies are able to travel more than 50 kilometres (31 mi) in a single day. Like the Border Collie the Kelpie is an intimidator. It locks eyes with an animal to get it to move. Unlike the Border Collie, the Kelpie also nips at the heels of herd animals to get and keep them moving. A typical Kelpie weighs from 25 to 45 pounds. They have a life expectancy of from 10 to 14 years on average. Kelpies have natural oils in their skin that keeps their coat weather resistant. For that reason they should be bathed only when absolutely necessary to avoid drying out their skin. An occasional rubdown with a towel keeps them clean. 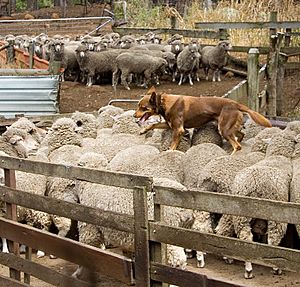 Kelpie walking across the backs of sheep 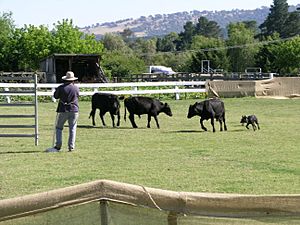 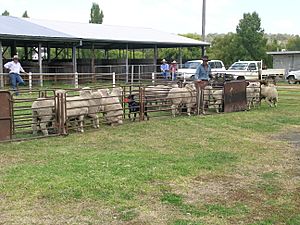 Kelpie going back down a race to move the sheep forward

The Working Kelpie comes in three coat types: smooth, short, and rough. The coat can be almost every colour from black through light tan or cream. Some Kelpies have a white blaze on the chest, and a few have white points. Kelpies sometimes have a double coat, which sheds out in spring in temperate climates. Agouti is not unusual, and can look like a double coat.

Working Kelpies vary in size, ranging from about 19–25 in (48–64 cm) and 28–60 lb (13–27 kg). The dog's working ability is unrelated to appearance, so stockmen looking for capable working dogs disregard the dog's appearance.

A Working Kelpie can be a cheap and efficient worker that can save farmers and graziers the cost of several hands when mustering livestock. The good working Kelpies are herding dogs that will prevent stock from moving away from the stockman. This natural instinct is crucial when mustering stock in isolated gorge country, where a good dog will silently move ahead of the stockman and block up the stock (usually cattle) until the rider appears. The preferred dogs for cattle work are Kelpies, often of a special line, or a Kelpie cross. They will drive a mob of livestock long distances in extremes of climates and conditions. Kelpies have natural instincts for managing livestock. They will work sheep, cattle, goats, pigs, poultry, and other domestic livestock. The Kelpie's signature move is to jump on the backs of sheep and walk across the tops of the sheep to reach the other side and break up the jam. A good working Kelpie is a versatile dog—they can work all day on the farm, ranch, or station, and trial on the weekends. Kelpies compete and are exhibited in livestock working trials, ranging from yards or arenas to large open fields working sheep, goats, cattle, or ducks..

All content from Kiddle encyclopedia articles (including the article images and facts) can be freely used under Attribution-ShareAlike license, unless stated otherwise. Cite this article:
Australian Kelpie Facts for Kids. Kiddle Encyclopedia.