Foot is also the name of a unit of measurement. See foot (unit of length). 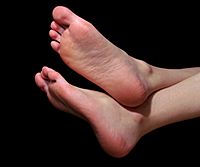 A foot (one foot, two or more feet) is a body part on the end of a leg. We use it when walking, and it is important for balance: it helps us stand straight. We also use it to kick, in both fighting and sports, football being an example.

People's hands and feet have the same shape: they both have five digits (the fingers and toes). Many other animals with backbones also have five digits. The part of the foot which joins it to the leg is called the heel. The bottom of the foot is called the sole. Half the bones in our body are in the foot. Doctors who work with people's feet are podiatrists or chiropodists.

Many animals have feet, and there are many different sorts of foot. The feet of monkeys are much like the hands. The hard foot of an ungulate is a hoof. When an animal has soft feet, or feet with soft parts on the underside, we often call it a paw.

In many societies, people like to cover the foot when they are with others, especially outside. In many cultures (for example North American, European, Japanese and others) people wear clothing over the foot to keep it safe. This footwear has special names, for example sandals, shoes, and boots. When people always wear footwear, especially in hot places or when they are very active, their feet can smell badly (foot odour). If footwear is too big or small, it can be bad for the feet when the person wears the shoe because it can cause long term damage. People who have foot, leg, and back problems can also get help from special shoes.

People have different traditions in different parts of the world for when to wear footwear. For example, in much of Europe and Canada, people usually do not wear their shoes or boots in a home or visiting. In the United States people often wear shoes inside a home. In Japan, people do not wear shoes in homes, and floors are often made of very soft materials, too soft for shoes. In cultures where people always wear shoes, people sometimes think it is bad not to wear them. Not wearing shoes can be good for the feet, especially for children's feet.

Conditions like Athlete's foot affect the feet, causing the feet to feel dry and cracked.

All content from Kiddle encyclopedia articles (including the article images and facts) can be freely used under Attribution-ShareAlike license, unless stated otherwise. Cite this article:
Foot Facts for Kids. Kiddle Encyclopedia.