Search and rescue facts for kids 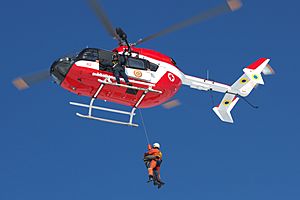 Search and rescue is when people look for a person who is lost or in danger. It is usually carried by ships, helicopters, or land vehicles that are specially equipped. Most of these missions take place at sea or in the mountains. Search and rescue missions are performed by civilian and military rescuers, or firemen.

Combat search and rescue is a military variant performed by special forces on the battlefield.

Types of search and rescue 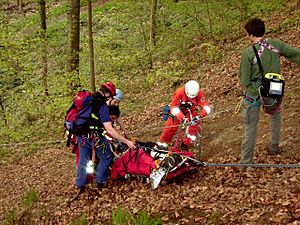 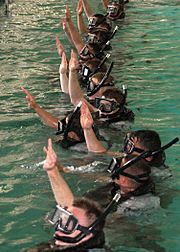 Search and Rescue students give the "I am all right" signal to let the SAR instructors know that they are ready for further instructions at the pool on board Naval Station San Diego.

Ground search and rescue is the search for persons who are lost or in distress on land or inland waterways. People may go missing for a variety of reasons. Some may disappear voluntarily, due to issues like domestic abuse. Others disappear for involuntary reasons such as mental illness, getting lost, an accident, death in a location where they cannot be found or, less commonly, due to abduction. Ground search and rescue missions that occur in urban areas should not be confused with "urban search and rescue", which in many jurisdictions refers to the location and extraction of people from collapsed buildings or other entrapments.

In most countries, the police are the primary agency for carrying out searches for a missing person on land. Some places have voluntary search and rescue teams that can be called out to assist these searches.

Urban search and rescue (US&R or USAR), also referred to as Heavy Urban Search and Rescue (HUSAR), is the location and rescue of persons from collapsed buildings or other urban and industrial entrapments. Due to the specialized nature of the work, most teams are multi-disciplinary and include personnel from police, fire and emergency medical services. Unlike traditional ground search and rescue workers, most US&R responders also have basic training in structural collapse and the dangers associated with live electrical wires, broken natural gas lines and other hazards. While earthquakes have traditionally been the cause of US&R operations, terrorist attacks and extreme weather such as tornadoes and hurricanes have also resulted in the deployment of these resources. 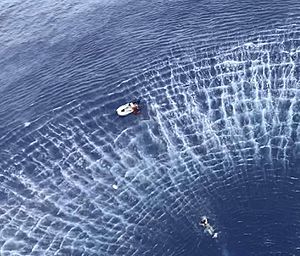 Maritime search and rescue is carried out at sea to save sailors and passengers in distress, or the survivors of downed aircraft. The type of agency which carries out maritime search and rescue varies by country; it may variously be the coast guard, navy or voluntary organizations. When a distressed or missing vessel is located, these organizations deploy helicopters, rescue vessels or any other appropriate vessel to return them to land. In some cases, the agencies may carry out an air-sea rescue (ASR). This refers to the combined use of aircraft (such as flying boats, floatplanes, amphibious helicopters and non-amphibious helicopters equipped with hoists) and surface vessels.

All content from Kiddle encyclopedia articles (including the article images and facts) can be freely used under Attribution-ShareAlike license, unless stated otherwise. Cite this article:
Search and rescue Facts for Kids. Kiddle Encyclopedia.