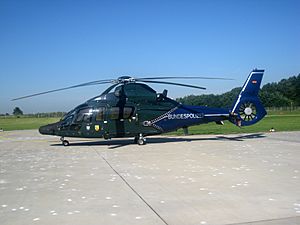 Eurocopter EC155 of the German police

The Eurocopter EC155 is the third generation of the Dauphin family of helicopters. Built by French and Germans, it is used both by civilian and military operators.

All content from Kiddle encyclopedia articles (including the article images and facts) can be freely used under Attribution-ShareAlike license, unless stated otherwise. Cite this article:
Eurocopter EC155 Facts for Kids. Kiddle Encyclopedia.