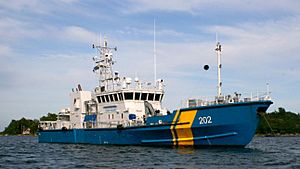 A Coast guard ship in Sweden 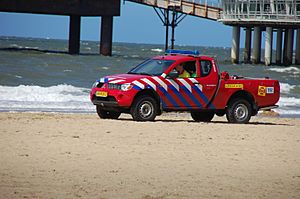 A Coast guard truck in the Netherlands

A coast guard or coastguard is a maritime security organization of a particular country. The term implies widely different responsibilities in different countries, from being a heavily armed military force with customs and security duties to being a volunteer organization tasked with search and rescue functions and lacking any law enforcement powers. However, a typical coast guard's functions are distinct from typical functions of both the navy (a pure military force) and a transportation police (a civilian law enforcement agency). 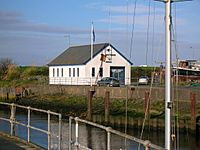 The predecessor of the modern Her Majesty's Coastguard of the United Kingdom was established in 1809 as the Waterguard, which was originally devoted to the prevention of smuggling as a department of the HM Customs and Excise authority. At the time, due to high UK taxation on liquors such as brandy, and on tobacco, etc., smuggling in cargoes of these from places such as France, Belgium, and Holland, was an attractive proposition for many, the barrels of brandy and other contraband being landed from the ships on England's beaches at night from small boats and later sold-on for profit. The Coastguard was, however, also responsible for giving assistance to shipwrecks.

Each Waterguard station was issued with a Manby mortar, which had been invented by Captain George William Manby in 1808. The mortar fired a shot with a line attached from the shore to the wrecked ship and was used for many years. This began the process through which the Coastguard assumed a life saving role. In 1821 a committee of inquiry recommended that responsibility for the Preventative Waterguard be transferred to the Board of Customs. The Treasury agreed and (in a memorandum dated 15 January 1822) directed that the preventative services, which consisted of the Preventative Water Guard, cruisers, and riding officers should be placed under the authority of the Board of Customs and in future should be named the "Coastguard". In 1845 the Coastguard was subordinated to the Admiralty. 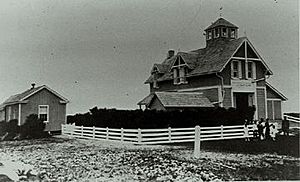 The Cape Hatteras Life-Saving Station, North Carolina, in use from the mid-19th century.

In 1829 the first UK Coastguard instructions were published and dealt with discipline and directions for carrying out preventative duties. They also stipulated that, when a wreck took place, the Coastguard was responsible for taking all possible action to save lives, to take charge of the vessel and to protect property.

Among the responsibilities that may be entrusted to a coast guard service are:

During wartime, some national Coast Guard organisations might have a role as a naval reserve force with responsibilities in harbor defenses, port security, naval counter-intelligence and coastal patrols.

The Coast Guard may, varying by jurisdiction, be part of a country's military, a law enforcement agency, or a search and rescue body. For example, the United States Coast Guard is a military branch with a law enforcement capacity, whereas the United Kingdom's Her Majesty's Coastguard (HMCG) is a civilian organisation whose only role is search and rescue. Most coast guards operate ships and aircraft including helicopters and seaplanes that are either owned or leased by the agency in order to fulfil their respective roles.

Some coast guards, such as the Irish Coast Guard, have only a very limited law enforcement role, usually in enforcing maritime safety law, such as by inspecting ships docked in their jurisdiction. In cases where the Coast Guard is primarily concerned with coordinating rather than executing rescue operations, lifeboats are often provided by civilian voluntary organisations, such as the Royal National Lifeboat Institution in the United Kingdom, whilst aircraft may be provided by the countries' armed forces, such as the search and rescue Sea Kings operated by the Royal Air Force and Royal Navy, in addition to any of the HMCG's own helicopters.

All content from Kiddle encyclopedia articles (including the article images and facts) can be freely used under Attribution-ShareAlike license, unless stated otherwise. Cite this article:
Coast guard Facts for Kids. Kiddle Encyclopedia.