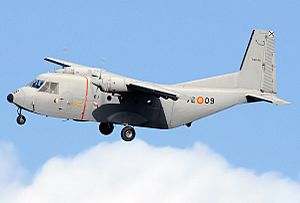 The CASA C-212 Aviocar is a Spanish twin-turboprop aircraft. Designed and built as a cargo aircraft, it is also a light airliner. It is used both by civilians and militaries. US Air Force use some as C-41 to support special forces. Some variants are built for reconnaissance and maritime patrol.

All content from Kiddle encyclopedia articles (including the article images and facts) can be freely used under Attribution-ShareAlike license, unless stated otherwise. Cite this article:
CASA C-212 Aviocar Facts for Kids. Kiddle Encyclopedia.