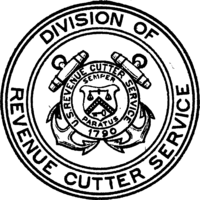 Alexander Hamilton, the first Secretary of the Treasury suggested the creation of the Revenue Cutter Service in a letter dated October 2, 1789. After being approved by Congress, the service started with 10 boats called cutters. At the time a cutter was a small fast sailing vessel described as "a small, decked ship with one mast and bowsprit, with a gaff mainsail on a boom, a square yard and topsail, and two jibs or a jib and a staysail." Before the Revenue Cutter Service began, the Continental Navy had been disbanded. Until the United States Navy was formed in 1794, the Revenue Cutter Service was the nation's only naval force.

After the American Revolutionary War, the United States was struggling financially. The new country depended on the money it received from import tariffs. Smuggling had been seen as a patriotic duty during the war, but was now a robbing the country of one of its major sources of revenue. Hamilton realized that if something was not done quickly, the country would suffer financially. He suggested that a fleet of 10 cutters could collect revenues and prevent smuggling.

The original specifications stated they were to be between 36 feet (11 m) and 40 feet (12 m) long. Each would be manned by two officers, six marines and crews of about 10 men and boys. 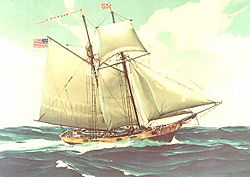 Although it was not one of the first 10 cutters called for by Hamilton, the North Carolina was purchased in 1792 for use by the Revenue Marine Service. Before the first 10 were approved a number of vessels were used as revenue boats, some as early as the confederation period (March 1, 1781, to March 4, 1789). The first 10 cutters built were:

Disagreements over treaties and America's status of neutrality during the French Revolution led to an undeclared war between France and the United States. The conflict was fought at sea from July 7, 1798, until the Treaty of Mortefontaine was signed on September 30, 1800. However, French privateers had been robbing American ships for several years before the Quasi-War began. American merchant ships were also being attacked by barbary pirates. USRC cutters were sent to deal with the pirates but soon the combination of French privateers and pirates were more than the service could handle alone. Congress passed the Naval Act of 1794 which established a permanent standing navy. The Naval Act ordered the construction and manning of six frigates. Three years later the first three ships were welcomed into the U.S. Navy. As the Quasi-War heated up, both the Navy and Revenue Cutter Service worked together to protect American ships.

Revenue Cutters were first sent to the Caribbean Sea to protect American shipping from French warships in the spring of 1799. About 12 French warships were captured by Revenue cutters in 1799 in the Caribbean. Of these, the 6-gun Bon Perre, captured by the USRC Eagle, was put into service as a Revenue cutter and served until 1801. In 1800, the brigantine Pickering and the frigate Insurgente both departed the East Coast to join the fleet in the Caribbean. Both were lost at sea. There were no survivors to explain what happened to the two cutters. On February 3, 1801 the treaty with France was ratified. At this time many in Washington, D.C. thought that the Revenue Cutter Service should be reduced in size. Many of its larger cutters were too big and too expensive to maintain. Many of the larger and older cutters were sold and many junior officers were let go.

When the war started, the Navy only had six vessels smaller than a frigate. None of these were the "small fast sailing ships" the cutters were. The shallow-draft cutters suffered significant losses but managed to distinguish themselves as a fighting force. The cutter Jefferson captured the first British merchant ship, the Patriot, in June 1812. In July the cutter James Madison captured the British ship Shamrock. In one battle, the cutter Surveyor put up such a fight against the larger British frigate HMS Narcissus, that when the Surveyor finally surrendered, The British Captain returned the sword of the American captain in recognition of his bravery. The cutter Commodore Barry was captured by British forces after putting up a strong defense. In one incident, the cutter Eagle was run aground during a battle with a British brig, the HMS Dispatch and a British sloop that was with her. The cutter's crew dragged the cutter's guns onto a bluff and kept fighting until late in the day. When they ran out of shot, they began firing back the spent British cannonballs (according to the legend). The War of 1812 saw the only USRCS prisoners of war taken by an enemy until World War II. The War proved the USRCS could hold their own against even the greatest naval force of the time.

During the Mexican–American War, President James K. Polk ordered the Secretary of the Treasury to have cutters in the Gulf of Mexico report to the United States Army (instead of the Navy). By the end of the war, eight cutters had served with the Army. This was out of a total fleet of only 14 cutters. They had capabilities the Navy (or Army) did not have. This was boats that could operate in shallow water and be used for amphibious landings. The Revenue cutters served on blockade duty, ferried men and supplies and supported Army and Navy operations.

On October 8, 1847, the Assistant Secretary of the Treasury informed his commanders that the service was low on funds. The expenses of operating in Mexico had reduced funds to a new low. The service needed to cut back on new ships and retire those too expensive to keep running. The USRCS was reduced to eight cutters. By 1849, six new cutters had been ordered but between the Chesapeake Bay and the Gulf of Florida, there were only two cutters. One more served in the Gulf of Mexico. Two of the new cutters, when they became available, would serve in the Atlantic while four would serve on the West Coast. 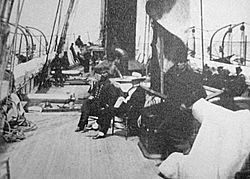 Deck of USRC Wayanda, ca. 1863. The seated figure of Abraham Lincoln was thought to have been added later

Just before the start of the American Civil War the Revenue Cutter Service had just 24 cutters to guard both coasts of the United States. Of these, 23 were wooden sailing ships ranging in length of from 25 feet (7.6 m) to 100 feet (30 m). All but one were either fore-and-aft rigged sloops or topsail schooners. The remaining cutter was a brig. The service also owned one modern (for that time) wooden paddle steamer measuring 150 feet (46 m) in length, the USRC Harriet Lane built in 1857-1858. The Harriet Lane was the pride of the Revenue Cutter Service. It was also the only cutter that had a full crew. The rest of the fleet barely had enough officers and men to operate the ships. Cutbacks in funding during the 1840s and 1850s and no pay raises left the service short of men. During this same period, the service began winter patrols in the North Atlantic Ocean to protect sailors. They also took on the task of enforcing immigration laws, especially on the West Coast where large numbers of Chinese coolies were being brought in on overcrowded ships.

At the start of the war a small number of officers and men left the service to join the Confederacy and formed the core of the Confederate Revenue Marine. Six cutters had been seized by Confederate forces while in Southern ports. The Harriet Lane was temporarily transferred to the Union Navy. President Abraham Lincoln requested the Navy to transfer a number of ships to the Revenue Cutter Service, however no records show if any were actually transferred. During the remainder of the war, Revenue cutters protected Northern shipping and assisted the Navy in blockading Southern ports. The cutter Harriet Lane fired the first shots of the Civil War from a ship. But in 1863, in a battle with the Confederate Army and Navy, the Harriet Lane was captured and nearly all the crew members were killed. 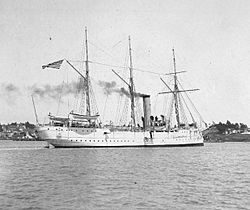 On April 21, 1898, the United States declared war against Spain. President William McKinley temporarily transferred the ships of the Revenue Cutter Service to operate under the direction of the Secretary of the Navy. They were ordered to cooperate with the Navy and became part of their auxiliary forces. The Revenue Cutter Service provided 13 cutters to assist the Navy. Eight served in the North Atlantic Squadron, four patrolled the West Coast and one served with Admiral George Dewey's Asiatic Squadron.

Together, the Revenue Cutter Service and the U.S. Life-Saving Service formed the United States Coast Guard on 28 January 1915. The law made the Coast Guard a permanent member of the United States military and allowed it to be transferred to the U.S. Navy whenever necessary. The practice of placing the Revenue Cutter Service under control of the Navy in times of crisis had been the custom in the past. But now it was made official by the new law which also changed its name.

All content from Kiddle encyclopedia articles (including the article images and facts) can be freely used under Attribution-ShareAlike license, unless stated otherwise. Cite this article:
United States Revenue Cutter Service Facts for Kids. Kiddle Encyclopedia.