Kids Encyclopedia Facts
Not to be confused with Washington County, North Carolina.

Washington is a city in Beaufort County, North Carolina, United States, located on the northern bank of the Pamlico River. The population was 9,744 at the 2010 census. It is the county seat of Beaufort County. It is commonly known as "Original Washington" or "Little Washington" to distinguish it from Washington D.C. The closest major city is Greenville, approximately 20 miles (32 km) to the west.

Established in 1776 on land donated by Col. James Bonner, Washington is the first city named after George Washington, the first president of the United States.

The settlement at the current location of the city was founded in the 1770s by James Bonner on his land and was known as Forks of the Tar. In 1776, it was renamed Washington. During the American Revolutionary War, Washington served as a supply port while all major neighboring ports were under British siege.

This mid-sized rural town has been called the "Heart of the Inner Banks". It has a range of historical buildings and landmarks that add to its architectural interest, with some dating back to colonial times. A self-guided Historic Walking Tour allows visitors to explore the neighborhoods. Homes of Victorian design, Arts and Crafts, and traditional early-20th century dwellings stand side-by-side on sidewalks lined with crepe myrtle trees. Condominiums and townhouses have been constructed on the city's waterfront to bring residents back to the river, the town's starting place. A Farmer's and Artisan's Market is held regularly on the town's green areas on the waterfront. 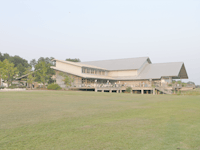 The Turnage Theatre, a restored historic vaudeville and movie theater, has opened in the downtown area and hosts plays and other types of live entertainment. Downtown restaurants benefit from a monthly downtown music and art festival called "Music in the Streets". The Beaufort County Arts Council, founded in 1972, is located in the restored Atlantic Coastline Railroad Station. It offers cultural programs including an annual juried fine arts show, a holiday arts and crafts show, a student art show, year-round exhibitions in the adjacent Washington Civic Center gallery, a series of free public concerts, an annual art camp for youth, workshops, lectures, and organized trips to attend cultural events throughout the region.

Evidence of the Union attack on Washington during the American Civil War is seen by the cannonball shot in an attorney's office located on historic Water Street. Confederates ships were shelling from the Tar River and forced the Union soldiers out. Both Union and Confederate soldiers burned many buildings as they retreated. Civil War re-enacters meet in the outskirts of Washington every year. Many nearby towns also contain Civil War artifacts and museums.

All content from Kiddle encyclopedia articles (including the article images and facts) can be freely used under Attribution-ShareAlike license, unless stated otherwise. Cite this article:
Washington, North Carolina Facts for Kids. Kiddle Encyclopedia.